Nelly Furtado’s still got it | TRNTO.com
Skip to content 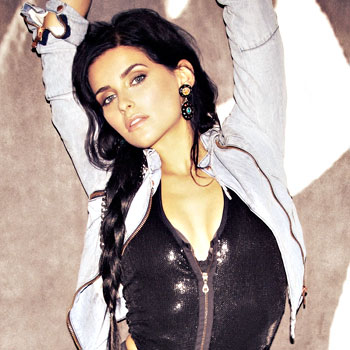 “Gangnam Style” is the biggest Korean export since Samsung. The pop video, by South Korean rapper Psy, has been viewed almost 500 million times and gotten more “likes” than any in the history of YouTube — 4.1 million and counting. Psy’s quasi-sensical and entirely infectious tune has everybody groovin’, from Katy Perry to Tom Cruise.

It’s inspired countless imitations, mashups and parodies. Usually austere CBC news anchor Peter Mansbridge can be seen replicating the original’s cowboy dance moves in one video, and another features Toronto Mayor Rob Ford barely tolerating a tuxedoed Psy wannabe as he dances around him during a high school football game.

So it comes as little surprise that if you punch “Nelly Furtado” into Google the first result the all-seeing search engine spits back — after the obligatory Wikipedia, Facebook and Twitter pages devoted to the pop star — is a shaky smartphone video of Furtado showing off her “Gangnam Style” during a recent concert in Manila.

“I was on tour in Asia, and during the second stop, in Singapore, my driver showed me the video and thought it was spectacular. I fell in love with the music and the dancing,” she says. “I often do covers, like J.Lo’s “On the Floor,” so I immediately grabbed everybody I could wrangle to rehearse “Gangnam Style” with me, and we performed it at the Araneta Coliseum where Muhammad Ali and Joe Frazier fought the Thrilla in Manila. It’s a fun, high-octane song that gets everybody moving.”

Indeed, Furtado does possess a certain “Gangnam Style,” which the song describes as a “girl with that kind of twist” and “who looks quiet but plays when she plays, a girl who puts her hair down when the right time comes.”

“I’ve been listening to K-pop for years,” says Furtado. “I was at an event at Mel Lastman Square three years ago, and they had these great Korean rappers. And I remember when I was younger hanging out at Pacific Mall and at Yonge and Finch and eating Korean BBQ and going to karaoke. Now hearing Korean pop on the radio is delightful.”

The 33-year-old B.C. native has just flown from her home in Miami to Toronto to promote her new album, The Spirit Indestructible.

“Songs are like babies, precious little things that are born.”

“I’m still getting used to the fall weather,” she says with a laugh. “But it’s nice to be back where it all started.”

Furtado moved to Toronto after high school to live with her sister, and it’s where she launched her singing career with the Grammy-winning album Whoa, Nelly! in 2000 that spawned the infectious, ubiquitous chart-topper “I’m Like a Bird”.

It’s been six years since Furtado’s multi-platinum album Loose, which featured the smash hit “Maneater” and collaborations with Justin Timberlake and Chris Martin. Motherhood has taken up much of her time. But she hasn’t been completely absent from the music scene. She started her own record label, Nelstar Records, and recorded a Spanish-language album, Mi Plan, which sold well internationally, spawned a South American tour and earned her a Latin Grammy. Still, her return to the more commercial pop cocktail of her roots is not without some trepidation.

“We wrote something like 50 songs to get to the 20 that became the album. And choosing them was difficult —while I find that songs are therapeutic, I kept wondering whether others are going to like the songs or am I just being selfish by including the songs that I like?“The songs are mostly uplifting and positive and make you move, but then something like ‘Enemy’ is so melancholy — does it belong? Ultimately, though, it was a creative pressure that I felt, not pressure, in terms of how the album will perform with sales and things. It’s pressure I put on myself.”

In fact, Furtado devoted so much time to getting each song on the album just right that Remi accused her of being “three years pregnant” with it, Furtado jokes. “Songs are like babies, precious little things that are born.” Some, like the title track, took only a couple of days to write.

“Rodney and I had such a spiritual connection between our musical inner children,” she says of the collaboration.
In some ways, Furtado credits her Spanish album with her current record’s success.

“Mi Plan forced me to look at songwriting differently. Now my lyrics are more cohesive, and I think about metaphor more, not so esoteric,” she says.

“At the same time, it’s a totally different-sounding album, with lots of urban sounds. It’s a pop record, with a bit of hip hop and dance and rock and folk, a bit of everything but still very much my sound, my voice.”

The album’s first single, “Big Hoops (Bigger the Better),” sees Furtado channelling her 14-year-old self and hanging at the mall and discovering hip hop, which explains the lyrical quotes from Salt-N-Pepa, A Tribe Called Quest and Blackstreet — bands the teenage Furtado listened to in the burbs of Victoria, B.C.

Likewise, “Parking Lot” and “Waiting for the Night,” inspired by a diary she kept as a lovestruck teenager, have a similar nostalgic bent.

But much of the album was inspired by Furtado’s more recent experiences. Furtado is an ambassador for charity Free The Children, which supports education and development projects around the world. Last year, she donated $1 million to the organization to assist in the building of a girls’ school in Kenya (it was same amount she was paid in 2007 for performing for Libya’s Gadhafi family).

“I’ve been to Kenya several times — it’s the most beautiful place in the world. Going there and meeting the people there, the women and young girls who are fighting to make a better community for themselves and a better world, it’s changed my life,” she says.

She’s also working closely with Me to We (www.metowe.com), a charitable organization that sells fashion accessories made by the Maasai women in Kenya.

“In addition to the beaded jewellery, they have a special “Spirit Indestructible” tank top I designed that they’re selling to raise money for a new high school in rural Kenya,” she says.