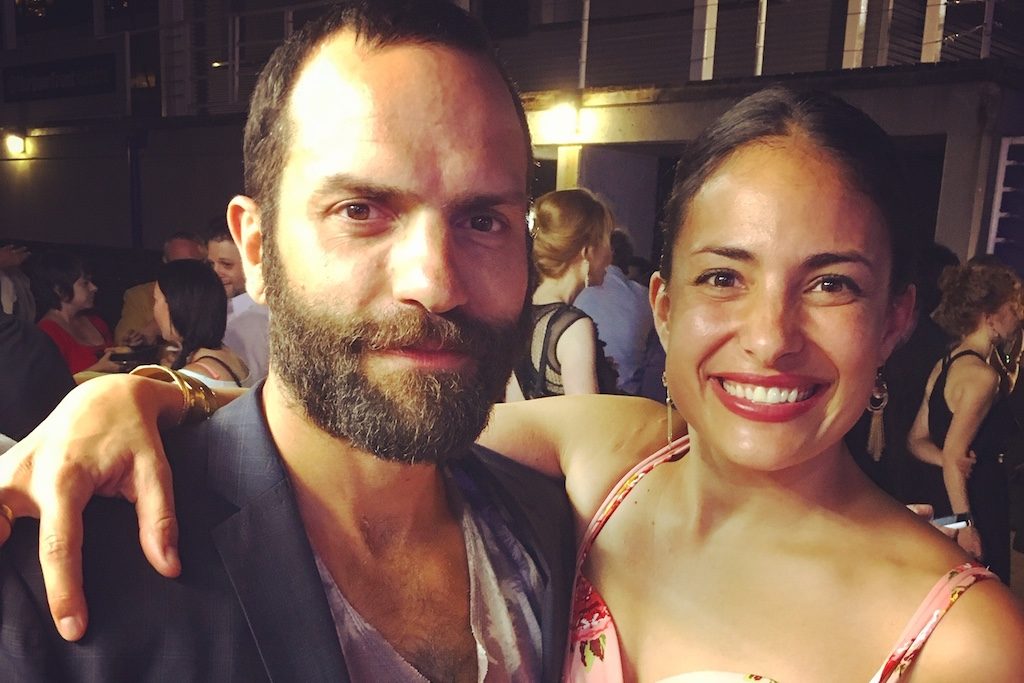 Actors Nicola Correia-Damude and Carlos Gonzalez-Vio know how to keep the spark alive in their relationship. We caught up with Correia-Damude, known for her roles on Shadowhunters, Burden of Truth and The Strain, ahead of the release of her Netflix series October Faction and her role in the new Global series Nurses, to learn about their storybook romance.

I was sitting on a patio in Kensington Market with my brother Luke, and out of nowhere he points across the bars and says, “Oh, that guy. His name is Carlos. You should go out with him.” I took one look at Carlos and said, “Yes, please.” He introduced us 10 minutes later, and the rest is history.

We went for sushi, and then Carlos had planned to take me to a fancy vodka bar, but when we got there, it was closed. We ended up wandering over to a pub a few blocks away and discovered our mutual love of relaxed environments, tequila and intimate conversation. I told him more about myself that first night than I had shared with anyone in a very long time. On the way home, we had our first kiss at the corner of Yonge and Richmond Streets. Sometimes on our anniversary, we still recreate that first date and always end the evening with a smooch on that corner.

From the very beginning, our love of theatre was a huge point of connection. We had some spectacular fights in the early days over the merits of different theatrical styles and genres. We’ve always challenged each other in really important and beautiful ways.

I was born on the first day of summer, so my parents named me Nicola Summer, and my dad always sang me “Summertime” as a child. Carlos and I were biking to La Palette on Queen Street when we passed a trumpet player busking in Kensington Market where Carlos and I had met three years before. We stopped to listen, and all of a sudden the musician started playing “Summertime,” and Carlos was on one knee. Carlos had planned the whole thing.

My first thought was, I can’t be wearing a bike helmet when he proposes! Then he started saying beautiful things and the music played and I said the most definite yes of my life.

We got married in a tent we put up on my parents’ land in Beaver Valley, Ont. Our families did the cooking and the decorating. My brother’s band Future Peers played the music. My mom and dad hosted 150 people like it was just another family barbecue; which it basically was since our families combined made up most of the guest list. It was DIY and beautiful and simple and very, very us. A few months later we went on a honeymoon to Uruguay where Carlos’s family is from. I saw where he lived as a child, and his Godparents threw us a wedding party in Montevideo. We’re both very family-oriented people, so it was all perfectly wonderful and perfectly us.

We have an incredible four-and-a-half-year-old who is our miracle boy. I’ve had endometriosis since I was 12 and had two sets of surgery before I was 30, so we weren’t sure if we could have children, which made getting pregnant even more special for us. Our son is hilarious and empathetic and weird just like his parents.

It’s hard. We spend a lot of time apart, but Carlos is the glue. He’s the greatest artist I know, but he’s also Super Papa, my biggest champion and completely devoted to our family. My mom is also our hero. She cares for our son when we’re working and is the only reason we’ve been able to continue acting and have alone time as a couple. We are so lucky and grateful to have her.

We have been living in the St. Clair West area for four years now. We love it there. We are currently renovating the two apartments in our house so that my brother Luke and his family and our little family can live together forever. It’s a dream come true.