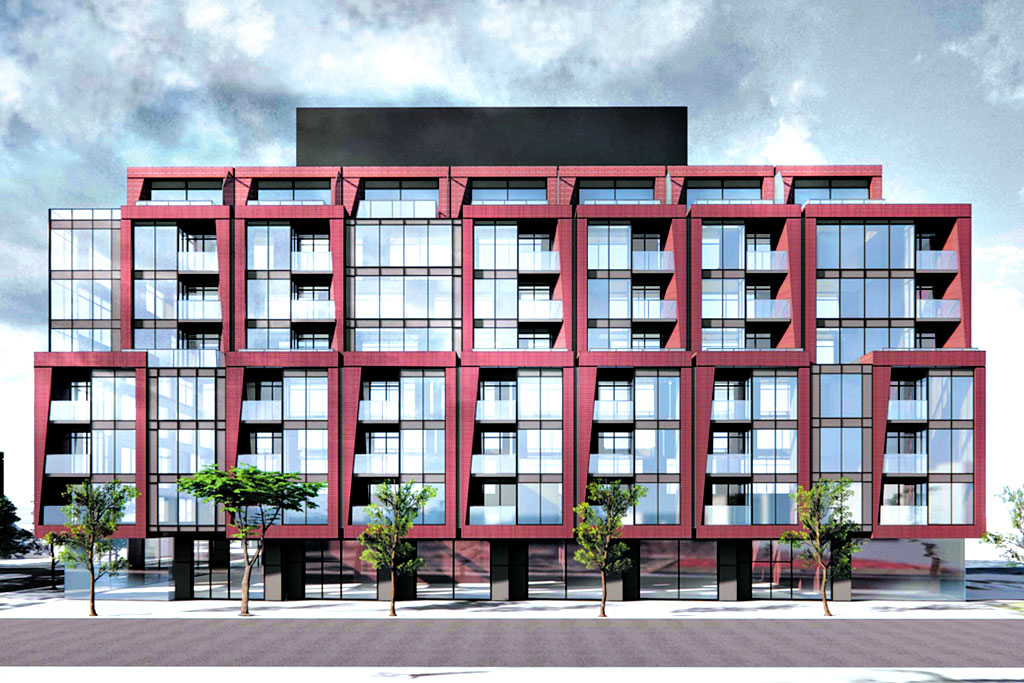 A new mixed-use mid-rise development has been proposed for 134 Laird Dr. in Leaside that fits in with the city’s plans to revitalize the area.

The development, headed by Core Development Group and designed by Turner Fleischer Architects, consists of an eight- storey building featuring 106 residential units, two live-work units and 74 square metres of indoor amenity space, according to the City of Toronto. The entire proposal takes up nearly 8,000 square metres.

Details of the project are currently scarce since Core has not paid its city application fee, yet, preventing details from being made public, according to city staff. However, the developer’s website shows the project to be twin buildings with a magenta colour, although it is not clear all 106 residences will be contained in both buildings. Core did not respond to a request for comment.

The development will face Laird but back onto a residential street to the west. The site previously was home to a car dealership, which has since moved across the road.

The project is following the city’s Laird in Focus plan, which gives guidelines for developments in the area, such as recommending mixed-use mid-rises. It was created in response to the construction of the Eglinton LRT, which will feature a Laird station and connect the area more easily to the rest of Toronto.

The plan outlines a “new streetscape” for Laird, which will include new bike lanes, widened sidewalks, landscaped setbacks and more greenery, replacing the current driveways and parking pads.

“Basically [the city] is supporting mid-rise development [in the area],” Geoff Kettle, co- president of the Leaside Residents Association, said.

Kettle explained that 134 Laird Dr. is now the second major development to enter the area. A proposed seniors’ home for 146–150 Laird Dr. was approved a few years ago, according to Kettle.

He said he met with the developers, along with other members of the community, in November last year before the application was submitted, and it appears the number of units has gone down from the 180 initially proposed.

“They assured us that they wanted to abide by the city’s plans,” Kettle said. “They weren’t looking for a fight — they were looking to fit in rather than stand out.”

Kettle doesn’t see the project disrupting the area, but he warned that the developer may not be legally obligated to hold more community meetings since they will not amend the zoning bylaw, which could create some upset from residents if no further consultation is provided.