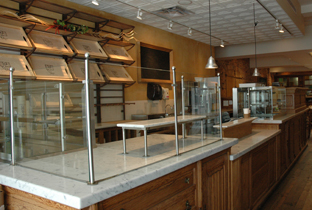 While popular Belgian bakery Le Pain Quotidien may be an international success, it failed to make a go of it in Toronto, shuttering its doors less than three years after opening here. Still, a local cake company thinks it can make a success out of the European brasserie experience in the spot once claimed by Quotidien. Patisserie Cocoa is set to open up an eatery as early as this month.

As a traditional brasserie (a mix between casual and fine dining), the place will offer specialty coffees, pastries, desserts and a full breakfast and lunch menu. According to manager Colin Anderson, the plan is to keep adding more menu items until the fall.

The brasserie will seat about 77 people, and will aim to replicate the French experience to a tee.

"If they want to come in for a continental breakfast in the morning, or in late afternoon for a bottle of wine and some specialty cheeses … they can," Anderson says.

The stone fireplace and the décor are true to French country style, and Patisserie Cocoa will also house an on-site baker to churn out different organic and specialty breads.

As for the desserts, Anderson says many of the items will be familiar to those who already know the cake company. We recommend trying some of the dome-shaped mousses or the French pear flan.