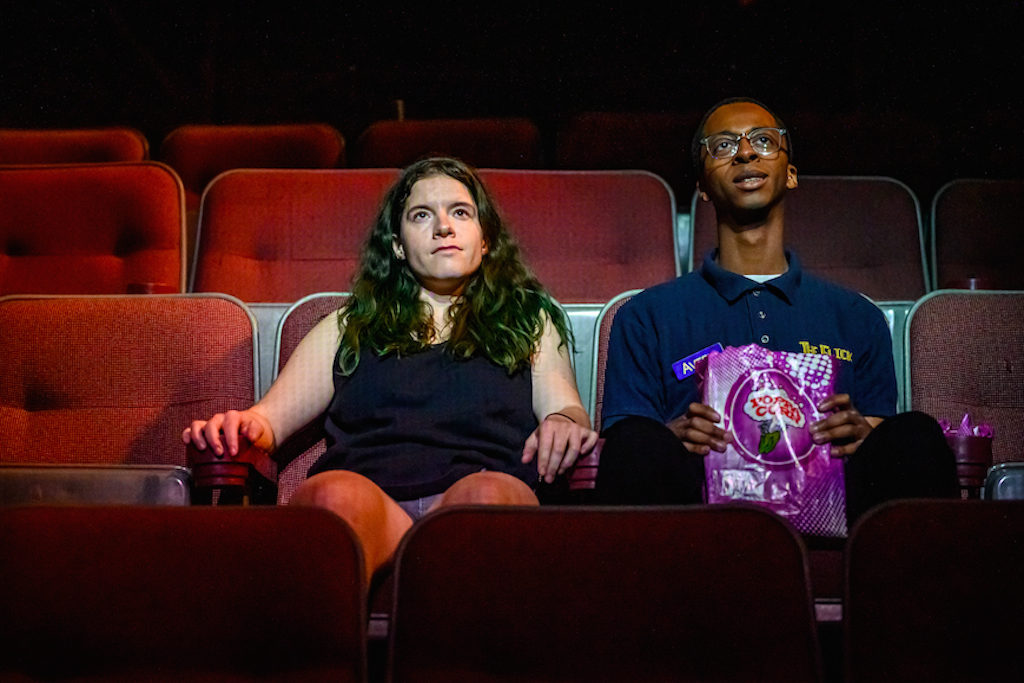 The Flick doesn’t set up as a blockbuster of a play. It is more than three hours of staring at the back of a movie theatre as the somewhat mundane lives of three cinema employees spill out on stage. But it works, for the most part. It is sparse, human and, at times, quite moving.

The new Outside the March production of the Annie Baker play runs at the Crow’s Theatre until Nov. 2.

The Flick, directed by Mitchell Cushman, follows the lives of three employees at an old-school cinema: two ushers and a projectionist — millennials currently dealing with a range of issues that are not uncommon and include depression, sexual dysfunction, limited career prospects and good, old-fashioned angst.

With the addition of a slew of film references that would impress even the most astute of movie buffs, the play has charm.

The theatre is set up so that one bank of seats for patrons is directly opposite the stage, which is essentially another bank of seats arranged to look identical to the back of a theatre including the red velveteen chairs, the running lights along the aisles and the projection booth on the back wall.

As the play opens, a solitary usher, Sam (Colin Doyle), begins sweeping up popcorn and other assorted garbage after the movie finishes. Sam is the oldest of the three characters in his mid-30s and the veteran of the cinema. He is soon joined by Avery (Durae McFarlane), a 20-year-old Black college student on a break from school who displays an encyclopedic knowledge of films. The third employee is Rose (Amy Keating), the rather crude and outgoing projectionist who got promoted ahead of lacklustre Sam.

Sam adores Rose. Rose is taken with the new kid, Avery. And so it goes.

Told through snippets of time as the house lights turn on and off over the course of the three-plus-hour production, the characters reveal their inner-workings. Rose is unable to be happy in a relationship. Sam still lives with his parents and is going nowhere fast. Avery’s mother left his father. He’s lonely and has long-running issues with depression that make it very difficult for him to make friends.

What is remarkable about the play is how accurately it depicts the ennui of a dead-end job, the odd friendships that aren’t really friendships at all that develop in order for people to make it through to the end of the next shift. In addition, The Flick is very accurate in its portrayal of movie theatre life. As someone who spent a couple of memorable teenage years working at one, rest assured this play nails it. Even the ticket scam is spot-on.  ’Nuff said.

The collapse takes the form of Avery being busted for scamming tickets by the new theatre owner, who is also planning to move from analog to digital. A double-whammy for the film lover Avery, who rails against digital with all his might. Worst still, his two co-fraudsters who initiated him into the scam with some serious peer pressure, end up letting him take the fall alone.

It’s a play that is easy for audiences to identify with. The characters are quirky and endearing but ultimately fairly ordinary. The acting is very good and generates a good deal of empathy and connection, almost surprisingly so. Indeed, Cushman manages to coax out some very fine performances from the young actors.

The work does seem unnecessarily long and as a result, drags in spots. At one point, I just wanted to get up on stage and sweep up the popcorn myself. The way the story unfolds is a double-edged sword as it helps propel the story forward but there are times I had hoped to find out more about a particular point or two.

There are no great questions asked, and no great questions answered. Ultimately, like these jobs, these moments in our everyday lives, this play is forgettable. Maybe that’s the point. That every life, every story, deserves attention and examination. Every life has meaning and has something to offer no matter the mundane circumstances.

Is that the point of The Flick? Maybe.