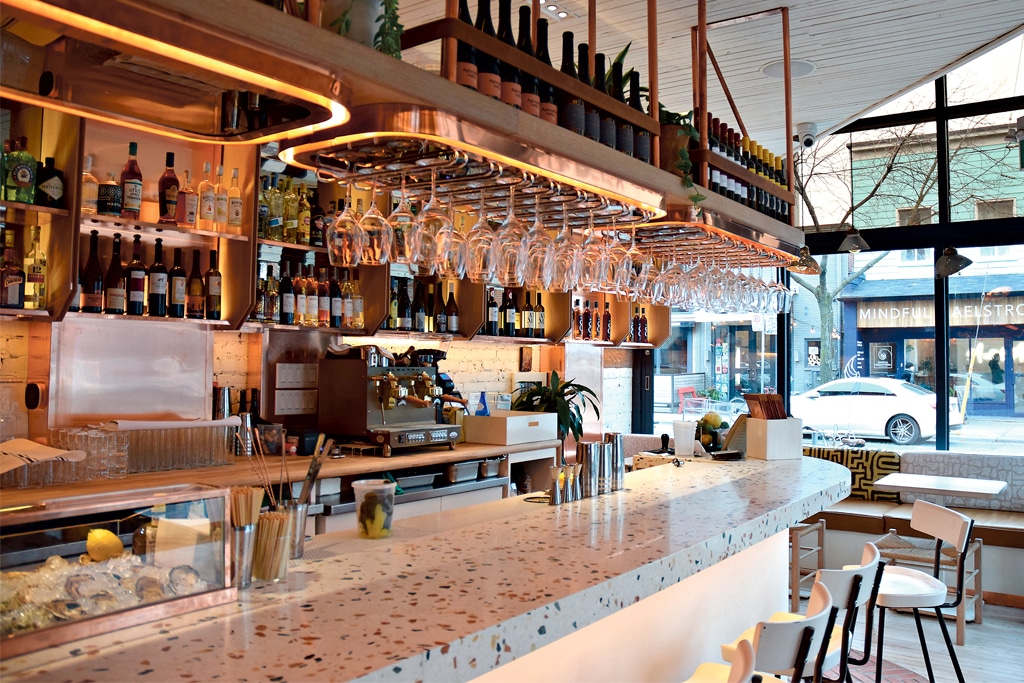 Mount Pleasant has a new destination for southern Italian cuisine and great wine with the opening of Balena. Helmed by chef Roberto Granata, who previously led the kitchens at Il Fornello and Mela, the restaurant focuses on ever-changing daily meat and fish dishes, along with classic pastas and shareable snacks.

Darna Middle Eastern Kitchen is now bringing modern flavours of the Middle East to Bayview and Eglinton. Drawing on influences from Lebanon and Israel (where owner Marwan Carmi previously lived before relocating to Toronto), the restaurant offers grilled dishes, traditional oven-baked casseroles and other authentic eats.

The team behind much-loved Greek restaurant Mamakas Taverna expands its domination of the Ossington strip with the opening of Bar Koukla. Styled after the relaxed mezze bars characteristic of Athens and Thessaloniki, Bar Koukla offers rotating small plates and a raw bar featuring fresh seafood imported from the Aegean.

Parkdale favourite Harry’s Charbroiled has returned under a new name: The Originals Dining Lounge. Grant van Gameren gave the decades-old diner a hip makeover in 2016 when he took over ownership. It looked like the end for Harry’s when van Gameren closed it in October 2019, but the space has been scooped up by two former Harry’s servers and an unnamed private investor with ties to the original owners.

The team behind Italian eatery Nodo is responsible for Toronto’s latest secret bar, Hush Hush, which is hidden behind a modest storefront in the Junction. Details about the bar are purposefully scarce, but Blood Brothers brews and vino from Rosewood Estates Winery are among the drinks on offer.

On The Stick (48 St. Clair Ave. E.) is a casual spot from chef CS Lee, an alumnus of Miku, Chotto Matte and Akira Back. Lee brings a mix of Korean and Peruvian influences to Japanese fare. As its to-the-point name suggests, skewered bites are the focus of the menu, along with pressed sushi.

The Butcher Chef has made its long-awaited debut near the Scotiabank arena. Specializing in local, seasonal meats and produce, the restaurant comes from the same team behind Michael’s on Simcoe.

Bunda Lounge at Dundas and Ossington has relaunched as Casablanca Supper Club, a new bar specializing in tapas, cocktails and champagne.

Ruby Soho Bar, a “relaxed neighbourhood bar and eatery,” will take over the former Portland Variety space at King and Portland this month. Details of the menu and concept have yet to be announced.

The Avenue Room is expected to begin serving wood-burning oven pizza at Eglinton and Avenue Road beginning sometime this month. The venue will also include an event space accommodating up to 100 people.

Little is known so far about Smokeshow BBQ, a new restaurant taking over the former space of the Mt. Pleasant Rose on Mount Pleasant, just south of Eglinton. We’re going to take a wild guess and assume BBQ will be involved.

Summerhill’s Yeah Yeahs Pizza abruptly closed its doors at the end of November. The Nova Scotia–based pizzeria opened its Toronto location in partnership with the owners of Boxcar Social, who discovered YeahYeahs on a trip to the East Coast.

Long-running Queen Street bar Tequila Bookworm recently closed its doors. According to a post on the bar’s Instagram, they’re one of the latest Toronto establishments to be driven out of their space by a hike in rent.

The Tulip Restaurant, one of Toronto’s oldest steakhouses, announced their closure on Jan. 1. The family-owned restaurant had been a mainstay of the east end for more than 90 years.