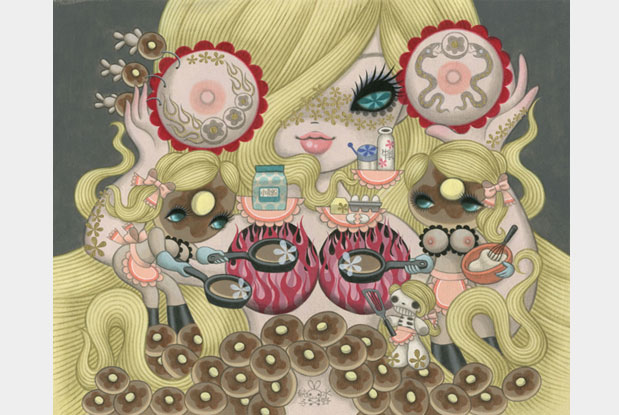 Food and female sexuality are the powerful blend of ideas behind a new exhibition at a Queen West art gallery.

This will be Mizuno’s second Canadian show, and the first in a new series of works inspired by her obsession with food and how it relates to women’s sexuality.

“The great things about Junko is that she’s self taught, so she doesn’t fit into categories like manga or anime,” explains Narwhal Project owner, Steve Cober. “She’s heavily influenced by American 1960s design, but with a Japanese attention to detail.”

Mizuno, who is originally from Tokyo, began drawing and publishing her own comic books over 10 years ago. “She’s so interesting because she works in comics, fashion, toys and graphic design without having to compromise her content or style,” adds Cober. “Her work is sexy without being over sexualized, like Bratz or the Kardashians. It’s more innocent.”

One particular piece Cober says to watch out for is a painting called Pancakes, which is a play on how pancakes and butter resemble a woman’s breasts.

The Narwhal Projects is following up the opening reception with an after party at The Bovine Sex Club, where burlesque performers from The Underground Peepshow will put on a show inspired by Mizuno’s work.