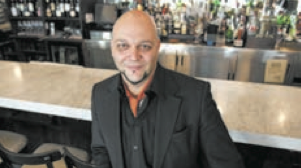 Maitre d’s are usually way over the top: affected English accent, chin tilted a bit too high and, you suspect, silently guesstimating your income. The chap that brought home our award was none of the above: Prete is modest and natural, knowledgeable without flaunting it. He went from busboy to barback and was named Canada’s best bartender at Grazie (his invention: the now-popular lychée martini) before setting up Coquine, so he certainly knows the biz.

Prepare to make room for one more at your table, ’cause your affable server is just as likely to sit down with you as to read the specials. Oh, and he might just bellow your order straight from the table, so don’t be alarmed. It’s all in keeping with owner Vito Rizzuto’s plan to start a place where the staff feel like family instead of forgettable bringers-of-food. With kids of regulars becoming regulars themselves, it looks like Rizzuto’s on to something.

The award for best nose was a toss-up between the formidable Jeremy Geyer of Centro and the revered Sara D’Amato of Truffles. Formidable vs. revered: that’s a toughie. Turns out D’Amato is on maternity leave (so probably hasn’t had a sip in months), which makes Geyer our man. But he’s no runner-up. Centro’s resident oeno can be found on-site nightly, dispensing vital, unstuffy advice to Centro’s curious clientele on what to slurp.