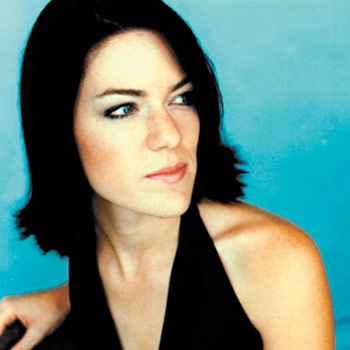 Born into the family business, Emilie-Claire Barlow grew up in a home filled with music, instruments laying about waiting to be played. Her parents were professional session musicians: Mom sang, Dad played the drums. And it didn’t take long for Barlow to follow suit.
“It was a very natural, normal part of my life,” says Barlow, on tour in support of her new (seventh) album Haven’t We Met?, which brings her to the Enwave Theatre in Toronto, Dec. 4 and 5.

Barlow spent as much time hanging out in a studio as most kids do watching TV. By the time she was seven, she had the headphones on while laying down tracks on her first commercial jingle. And she hasn’t stopped since.

“My mother was singing a jingle, and they needed a kid’s voice on it,” Barlow explains. “They asked me if I was interested, and that was that.”

Barlow started her first jazz quartet in high school, while attending Etobicoke School of the Arts, and released her debut album, Sings, in 1998. She’s been nominated for Juno Awards for Best Vocal Jazz Album in 2002 and 2008 as well as winning Female Jazz Vocalist of the Year at the 2008 National Jazz Awards.

“I always just loved to sing, I knew that … and I loved music theatre, and that really solidified my love of the great American songbook, the standards,” says Barlow. “So that is where I fell in love with that repertoire.”

From Gershwin and Rodgers & Hammerstein to Brazilian bossa nova, Barlow oozes charm and sophistication to breathe new life into these timeless classics.

“They are well-crafted songs that can hold up to many different interpretations,” she says. “That’s exciting to me, taking a song and just trying to make my mark on it.… And there seems to be an endless supply of incredible songs from the ’30s and ’40s, and that’s been an inspiration.”

But Brazilian singer Rosa Passos is one artist she keeps coming back to year after year, including a song on each of her records.

“She has the most charming voice. She’s almost girlish yet extremely sophisticated in her way of singing,” says Barlow, who first listened to Passos some 15 years ago. “I didn’t know what she was saying, but I just fell in love with her and started learning her songs phonetically.”

But something was missing. Primarily, Barlow didn’t know what she was singing about. “It was like a huge piece of the puzzle missing,,” says Barlow, who began taking language lessons. “It helped me to understand the context of the songs, to wrap my head around the language a bit so that I could sing the songs authentically.”

In addition to Brazilian music, Barlow will often add French songs to her repertoire, drawn in by the lyrical nature of the music.

“French is a very musical language, a very singable language,” says Barlow, who includes songs such as “C’est Merveilleux” on her new album. “If a song hits me, it doesn’t matter what language it is in.”

Haven’t We Met? and her just re-released holiday album Winter Wonderland are both available on Barlow’s own label, Empress Music Group. For more information, go to www.emilieclairebarlow.com.