NoNo’s Pastaria is out, and The Guild is in - TRNTO.com
Skip to content 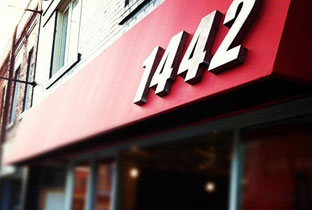 Since early last year, we had been anticipating the opening of NoNo’s Pastaria at 1442 Dundas West. A project from chef-owner Mani Binelli, the concept was supposed to be a cozy hole-in-the-wall with a rotating selection of pastas and other Italian fare. But in the process of working on the space, Binelli decided he wanted to switch things up a bit.

“The NoNo’s concept was decided before I found the space,” he says. “And the space has evolved and turned into more than that.”

The upcoming restaurant is now called The Guild, and according to Binelli, it’s going to have a bit more of an edge. Expect modern cooking techniques, such as sous vide and liquid nitrogen, taking place in an appropriate Dundas West setting.

Binelli, who cut his teeth at Centro and has worked in a slew of other high-end restaurants, says that the space is essentially ready to go; he’s just waiting on inspections and the ever-elusive liquor licence.