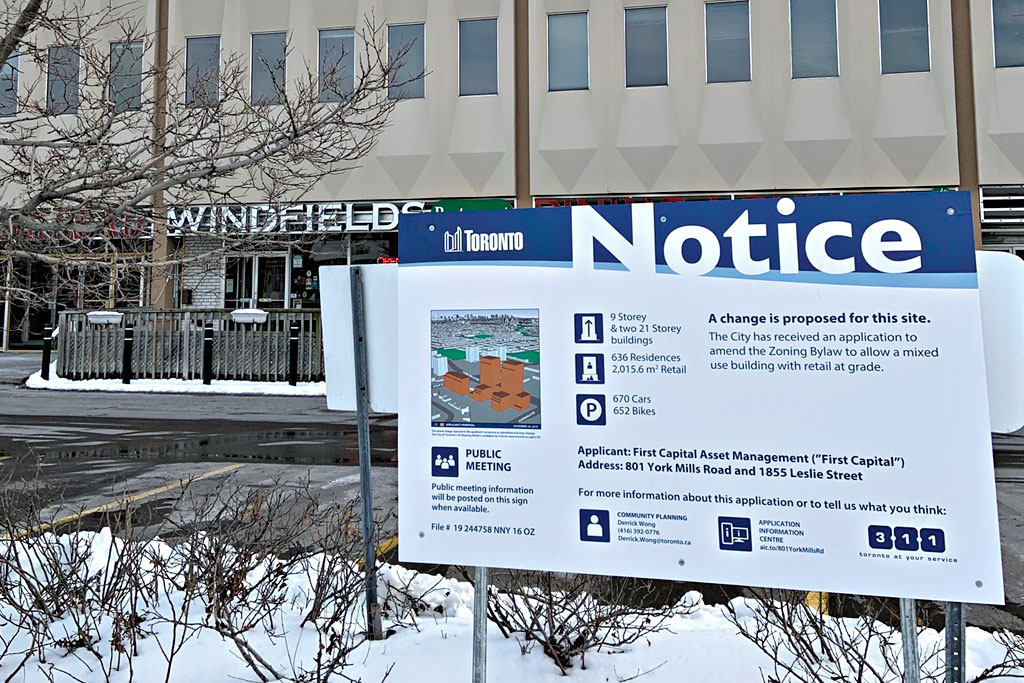 A development application has been submitted to the city that would transform the southeast corner of York Mills Road and Leslie Street and, if approved, would necessitate the exodus of a number of well-known businesses before construction begins, including longtime family restaurant Windfields.

Popular local institutions such as Windfields could find a new home in the new development or somewhere nearby.

Planning consultants Bousfields, on behalf of owners First Capital,  have submitted a rezoning application to the city to develop the corner. The site is currently home to a retail and office building, a veterinary clinic, a Swiss Chalet and Windfields, amongst others.

The application is for two 21-storey towers, a nine-storey mid-rise building and a public park. The application includes 636 residential units, 2,015 square metres of retail space along York Mills and 670 parking spaces.

“The initial thoughts are the development seems a bit higher density than I would think for the site,” said Brian Story, vice-president of development with local resident’s association Don Mill Residents Inc. (DMRI).

Story said the buildings will reduce the privacy of houses adjacent to the proposed development.

“The new building is proposed to be 21 storeys, and will literally be looking down into their backyards,” he said.

“So I see that one as problematic, and we’ve raised that with them, and they have not, at this stage, come up with any ideas of what to do about it, except perhaps landscaping.”

Story said DMRI also has concerns about the development’s impact on the neighbourhood during the construction phase.

“I do expect to see some changes in the development. I don’t mean dramatic changes because I don’t think it’s a completely unreasonable development,” said Story, who said the site is already zoned mixed use.

“It’s not zoned for this density though, so they’re asking for substantially more density than it’s zoned for, and they’re going to have to get a change for that.”