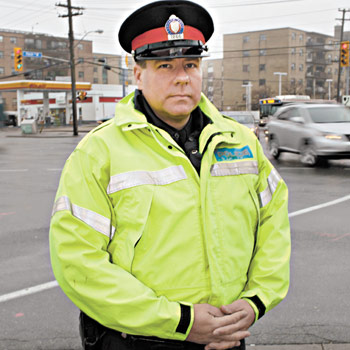 North York’s Bathurst Street and Finch Avenue West intersection is the worst of the worst according to a recently compiled list of the city’s most dangerous intersections.

Sgt. Tim Burrows said the results are part of an internal search, run with Toronto Transportation Services, to determine the ten locations. The results are based on three criteria: vehicles making right turns, pedestrians who are crossing with or without the right-of-way at intersections with traffic signals and collisions where injuries are either life-threatening or fatal.

“We compiled this information so that we could tell our divisional traffic sergeants: ‘Here’s the areas of concern,’” Burrows said. “That way, we can take an intelligent and strategic look at enforcement or engineering. Anything that might be leading to these areas.”

Serious collisions at other North York intersections have occurred recently. A 65-year-old man was killed after being struck by a vehicle at Greenwin Village Road and Village Gate Boulevard.

“When we look at the frequency of collisions by area, the north central part of the city is over represented,” Brady said, describing the region as bound by Eglinton Avenue to the south and Steeles Avenue to the north, between Jane Street and Warden Avenue.

“What we are looking for is for people to drive more cautiously and to take the idea that road safety is everybody’s responsibility, but it begins with your own actions,” Sgt. Burrows said.

There have been 40 traffic fatalities to date this year in the city, 26 of which have been pedestrians, Sgt. Burrows said.