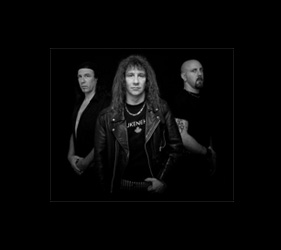 Now, the DVD that documented their journey from groundbreaking ’80s band to obscurity and back again has turned the band into an overnight sensation.

In the last year, they’ve been Twittered by stars like Chris Martin of Coldplay and John Mayer, sought out by movie and TV producers for guest cameos, opening for rock legends AC/DC in front of 80,000 people and soon making an appearance on TV’s holy grail The Tonight Show.

Ironically, it took them more than 30 years to get here.

It is hard to describe Robb Reiner as a kid. But as one of the two founding members, he has had the rare opportunity to keep part of his life the same as it has always been since his childhood days in the Bathurst and Sheppard area of Toronto. (That, and he can’t keep his oversized mitts out of the office candy jar during the interview.)

Through Marty Hoffman, a mutual friend, Reiner and Steve “Lips” Kudlow met in their early teens in North York and never looked back.

“He was weird,” says Reiner, of his appreciation for Kudlow’s demeanour in the early days. “He had this eccentric nuttiness that I recognized as a kid.” And he could play. “The guy was amazing,” says Reiner.

Inspired by bands such as Black Sabbath and Grand Funk Railroad, the boys adopted the name Gravestone and started to evolve a pioneering sound that would influence an entire musical genre. They were heavy metal before it existed.

“There was no such thing as heavy metal in 1973,” says Reiner. “It was an attitude and an attraction toward things not mainstream.”

The band changed its name to Lips and started building momentum toward a record deal.

In 1981, they inked one; Anvil was born; the band released the seminal album Metal on Metal; and started touring the world looking like a sure thing for rock stardom.

“Metal on Metal was a blueprint for everything that followed,” Reiner explains.

Then the bottom fell out. Mismanagement and bad timing combined to end the band’s meteoric rise while those they inspired — Metallica, Anthrax, Slayer and others — passed them by on their way to selling hundreds of millions of records and living a dream life.

Over the next quarter century, Anvil turned out more albums, toured and rocked, but never regained their foothold. That is until a former fan kid and tour roadie from England by the name of Sasha Gervasi sent a single, solitary e-mail that changed it all.

Already an established Hollywood writer who had worked with the likes of Steven Spielberg and Tom Hanks, Gervasi took it upon himself to document the band’s progress for two and a half years.

The documentary, Anvil! The True Story of Anvil, which was released in Canada last month, premiered at the Sundance Film Festival and was a smash hit.

In addition, their 2007 album This Is Thirteen — the creation of which was one of the central focuses of the film — has been re-released by VH1 Classic Records, and a book is on the way.

The movie, hailed by the London Times as “the greatest movie ever made about rock and roll,” shows in intimate detail the ups and downs of the music business, but touches an emotional chord that goes well beyond music.

And the band is finally back in the spotlight that has eluded them for 25 years. The guys are re-recording old tunes for a soundtrack, have a new album in the hopper entitled Juggernaut of Justice and will get back out on the road for a tour in November, with a North American leg set for January.

“We are just enjoying it,” says Reiner. “That’s all we can do. It is a celebration, and these are exciting times.”