Not all vendors at local farmers' markets are the real deal | TRNTO.com
Skip to content 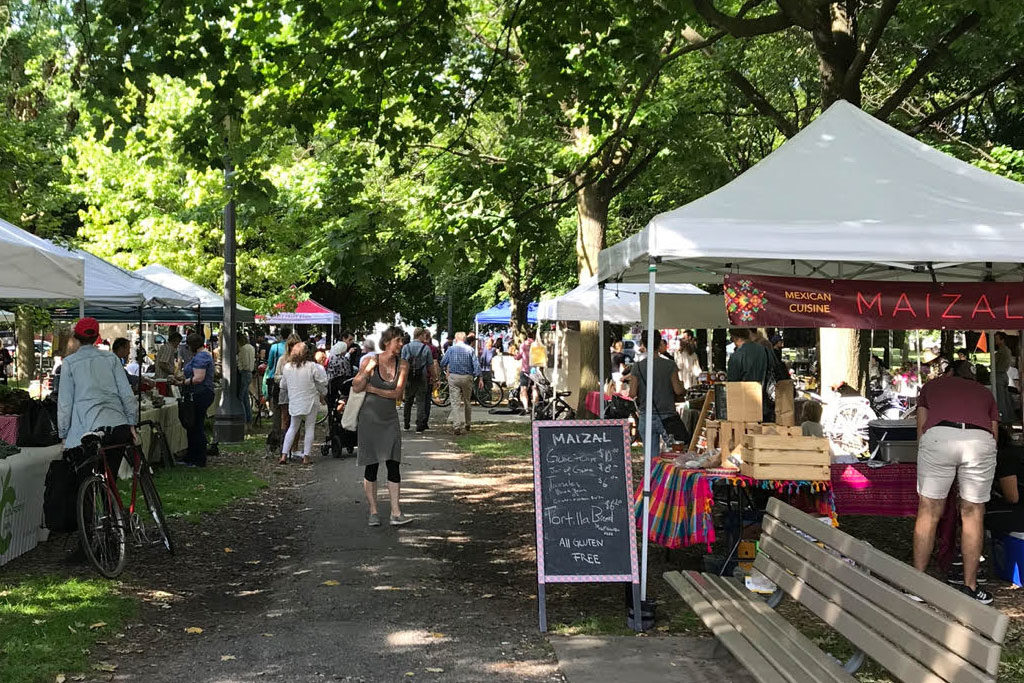 With spring in full swing, local farmers markets are set to open in neighbourhoods across the city this month. Torontonians’ trips to the grocery store will be swapped out for weekend mornings picking up fresh produce at their local market and chatting with Ontario farmers. But what if the produce at the market is no different than what’s at the grocery store? And what if that “local farmer” isn’t a farmer at all?

After a CBC Marketplace exposé, consumers were surprised to learn that some of the produce coming to their local market hailed not from the idyllic fields of a nearby farm, but from the Ontario Food Terminal, where grocery stores buy their wholesale produce.

Some have called for strict legislation to ensure only farmers be allowed to participate in farmers markets, whereas others insist the issue is vastly more complicated.

“Each market is responsible at the end of the day for both vetting vendors, deciding on their own requirements for vendors and, most importantly, communicating this to their audience,” says Cameron Dale, the markets manager at Evergreen Brick Works.

Evergreen has a producer-first market, meaning vendors can carry up to 15 per cent of products they didn’t grow themselves, but even those products must come from a neighbouring farmer that they can trace. All products must be clearly labelled at the stall so consumers have complete transparency as to what they are buying and eating.

Public Health Ontario has a set of rules for farmers markets regarding food premises regulation.

“For Public Health, to have a  farmers market designation, you must have 50 per cent plus one farmers who produce their own product,” says Carolyn Wong, co-founder and manager of the Trinity Bellwoods Farmers’ Market.

However, there aren’t any other top-down requirements for market participation.

“Frankly, I think [government regulation] would be maybe impossible or at least take a very long time to implement. California is the only state that certifies their vendors and pays for public inspectors to verify them. We don’t have that infrastructure, and so many markets exist because of the work of volunteers.”

The debate surrounding who gets to participate has some markets experimenting with certifications. One such program is the trio of GTA MyMarkets, which sell only MyPick verified produce. These markets take place in East Lynn Park, Liberty Village, Bloor Street and Borden Street in the Annex.

The certification process is useful for all parties — vendors, consumers and market organizers.

“We support vendors who have certification and always encourage vendors to seek certification when possible,” says Dale. “Building on this practice last year, we supported vendors in visiting other vendors to verify that what is on their table is growing in their fields. This community-building approach to food transparency provided … valuable opportunities for farmers to network and learn from each other.”

Although Clark has found that the farmers they work with appreciate an infrastructure of authentication, she notes that FMO isn’t trying to homogenize the variety of vendors that are allowed to sell at farmers markets.

“There’s a place for resellers at a market,” says Clark. “It rounds off selection for consumers, can extend the time a market can run, and there are even farmers who supplement what they grow, and there’s nothing wrong with that. But it’s how a market manages and identifies that variety that matters.”

Wong is unsure of whether certification procedures are going to be the ultimate solution to the issue of disingenuous vendors and thinks that perhaps the solution may be more grassroots.

“Ultimately, you have to trust your market, your farmers and vendors,” says Wong. “It’s about cultivating personal relationships.”

The Bellwoods market includes some farm visits that tend to occur one year after the vendor is accepted, but not all markets have the resources or volunteer power for that level of verification.

“The last 13 years has seen a surge in farmers markets,” says Wong. “But before, farmers markets were something almost fair-like. Historically, that included resellers, who’ve possibly been doing what they do for 30 years now.”

Wong touches on a crucial distinction in the debate about “fake farmers” that many organizers and farmers believe must nuance the “who belongs at markets” argument.

It’s a debate that needs to be more clear-cut than conflating reseller with “fake farmer.” A fake farmer could undercut farmers’ ability to get a fair price on their homegrown produce as well as mislead the customer into paying higher prices for produce available at their neighbourhood Longo’s, but a reseller is not as problematic to many long-standing local farmers.

“I’ve been a vendor at the North York farmers market since it started 26 years ago,” says vegetable and herb farmer Ron Thiessen of Thiessen Farms. “One of the other vendors who has been there since day one is a reseller, and he’s our only one. I think it’s extremely important that the market is open and honest about who’s there, and I do think it should mostly be farmers, but this guy can get stuff the rest of us aren’t growing, and it rounds out our market’s selection for the customers.”

So what about consumers who visit farmers markets specifically for the opportunity to buy fresh, locally grown produce from the person they’re handing their cash over to?

“Step one is talking to your vendor,” says Clark. “Ask about their farm. See if you can visit. Ask for a business card or take a look at the boxes behind their table. I know that some vendors know the tricks on how to seem like they’re real farmers, but it’s a starting point.”