Nothing Funny Happened on the Way to the Canon | TRNTO.com
Skip to content 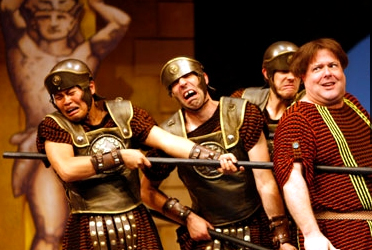 Stephen Sondheim finally moved out of the shadow of Leonard Bernstein (who wrote the music for WEST SIDE STORY with his lyrics) and Jule Stein (ditto for GYPSY) when he got the chance to write both the music and lyrics for the first time, using the hysterically funny (and charmingly raunchy) script of Burt Shevelove and Larry Gelbart’s A Funny Thing Happened on the Way to the Forum.

The gifted artistic director of Stratford, Des McAnuff, directed it at the festival last summer, where it was a huge hit. How could it not be?

McAnuff directed it again in this Mirvish production at the Canon, which has run only since just before Christmas.  The theatre critics of the daily newspapers all expressed disappointment and surprise:  it has lost so much of the humour and pacing that was seen at the Stratford Festival!

It’s true. The present production in downtown Toronto lost a lot of magic and wit in the transfer.

But the wonderful Bruce Dow—whom I saw here in the lead role of Pseudolus (every other performance has the nearly-as-gifted Sean Cullen), a slave who longs to be free—is marvelous, in both voice and movements.

If you did not see this farce—a rare but extremely successful attempt to modernize the ancient Roman comic playwrights (and fathers of the modern TV sit-com), Plautus and Terrance— at Stratford it is well-worth attending.

There are great moments of laugh-out-loud gags (my companion was a dear friend who was not familiar with this early musical by the great Sondheim and she never stopped giggling and even howling).

So why make her feel bad by saying, “It was better last summer!”

The Canon is a stunning, comfortable theatre, and this is a very entertaining show.

Yes, the usually magnificent Shaw-regular Stephen Sutcliff is, surprisingly, not as good playing Hysterium as Stephen Ouimette was last summer at Stratford.  But so what.  Go and laugh; it’ll do you good.