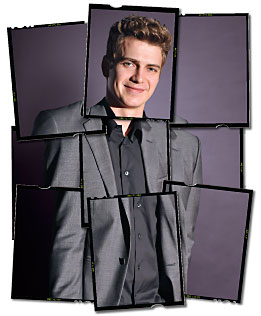 HAYDEN CHRISTENSEN IS one of those rare actors who got into the “biz” for the love of the craft, rather than the pursuit of fame and fortune. He’s drawn to projects with visionary directors, and at just 30 years old, Thornhill’s most famous export has already worked with some of Hollywood’s greatest filmmakers including George Hickenlooper (Factory Girl) and Sofia Coppola (The Virgin Suicides).

Christensen shot to superstardom earlier this decade as Anakin Skywalker in the Star Wars prequels when he had a chance to work with legendary director George Lucas. Before that, he made his mark in Hollywood as Kevin Kline’s angst- ridden son in Irwin Winkler’s Life as a House.

With his penchant for working with top directors, it’s not surprising that Christensen is a perennial film festival favourite. Last year, he walked the red carpet on his home turf at TIFF to debut Vanishing on 7th Street, a chilling post- apocalyptic thriller directed by Brad Anderson.

Christensen says he jumped at the chance to work with Anderson. “He’s extremely articulate in his vision, and his past films have all been very creative endeavours,” he explains. “Tonally, he’s able to capture something that is really unique and an extension of his creativity.”

Vanishing also gave Christensen an opportunity to flex his own creative muscles and collaborate with the tiny cast that included Thandie Newton and John Leguizamo. “What I liked about the script was the containment of it and how that would allow for real character exploration,” says Christensen. “I thought we could approach it like a play, and that was really appealing to me.”

Christensen has appeared in an eclectic range of films since his Star Wars years. In addition to the intense Vanishing on 7th Street, he also starred in Takers last year, an ensemble crime film co-starring fellow Canuck Paul Walker and Idris Elba. Before that, he appeared in New York I Love You alongside his long-time love Rachel Bilson.

Christensen has been busy behind the scenes, too. He and his brother Tove run a production company called Forest Park Pictures. Christensen starred in the company’s first feature film, Shattered Glass. The multi-talented siblings signed a three-picture deal for Forest Park with Hollywood heavyweight Screen Gems in 2008. The Brothers Christensen have clearly done their hometown proud.