Oh Boy Burger Market closing, to be replaced with a Boehmer gastropub - Streets Of Toronto
Skip to content 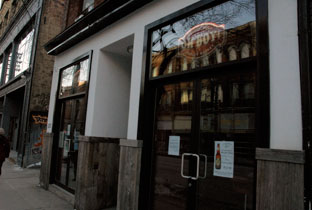 The last Oh Boy burger is being flipped this Sunday at Oh Boy Burger Market on Queen West, with the resto-bar shutting its doors for good. But the news isn’t all bad: by this spring, a new European inspired gastropub with a more varied menu – including burgers – will take its place.

Oh Boy is known for its old fashioned staples with modern twists, including top cut beef and bison burgers, chicken burgers, and veggie burgers. The straightforward menu is complimented with sides including handmade French fries, onion rings, soft drinks and desserts, served in a subtle upscale wooden décor with a lively pub atmosphere.

With Torontonians on a burger bonanza these days, and burger bistros on the upswing, it may be surprising to see a centrally located sirloin sandwich shop close its doors a year after opening. Co-owner Paul Boehmer (of Ossington’s Böhmer), who came on board around six months ago when the burgers weren’t exactly flying out the window, says that the area was a bit oversaturated.

“I think there were just too many burger restaurants, and the area wasn’t quite ready to handle that,” he says. “I think you have to have a packed house every day and burgers aren’t always something that you can do that with.”

He’s currently working on conceptual designs for the location’s next eatery, which will feature more upscale eats and local brews on tap.

“People want variety, and with that concept I can have burgers, like a grass-fed burger or other specialties, but combine it with other menu options.” The restaurant likely won’t undergo a huge physical transformation, but Boehmer would like to see the kitchen moved to the back of the restaurant as well as a repurposing of the interior.

“It will be something more fun, a bit more trendy, sort of like a brassiere,” he says, adding it will likely carry his own namesake above the door.

After battling a series of obstacles, this Toronto chef has successfully opened a gourmet gastropub