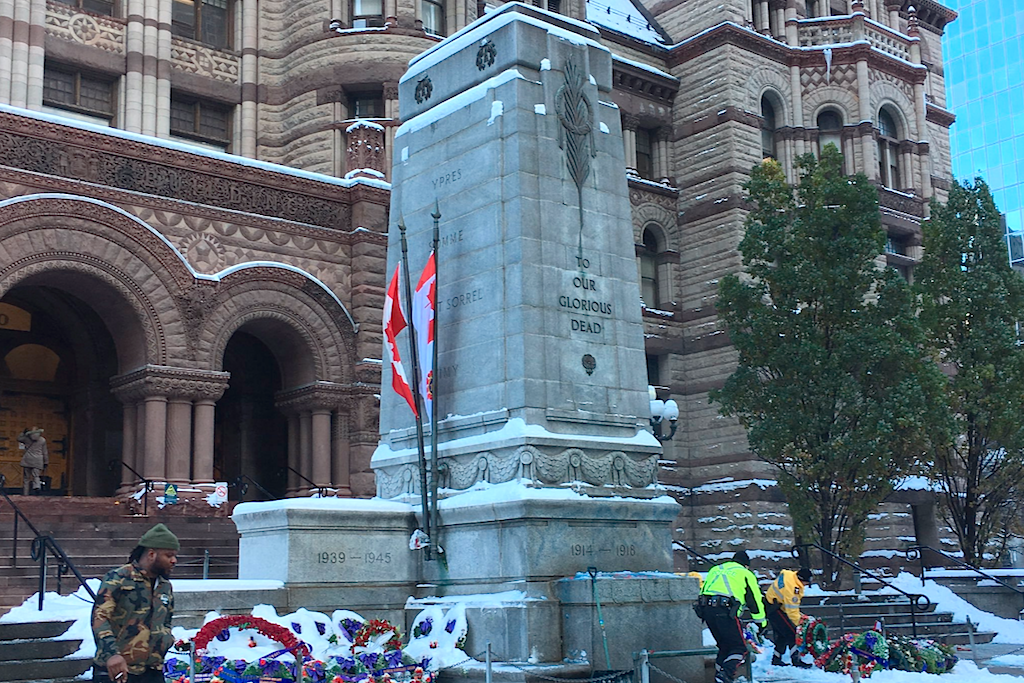 The cenotaph at Old City Hall has been vandalized just a day after hundreds gathered to honour veterans and fallen soldiers at Toronto’s largest Remembrance Day celebration on Monday.

Both sides of the monument were covered with large spray-painted text. The words “Ye broke faith” were cast in dark blue over the dates of the First World War on the south side of the monument that faces Queen Street West. Meanwhile, on the west-facing side, the graffiti read simply “With us.”

The words would appear to be a reference to John McCae’s well-known poem “In Flanders Fields,” which ends with the following lines: “If ye break faith with us who die / We shall not sleep, though poppies grow / In Flanders Field.”

While it’s unknown exactly when the vandalism took place, a photo posted to Twitter just before 7 a.m. on Tuesday shows the vandalized cenotaph surrounded by wreaths that were placed there during the ceremony. Police were notified at the same time. This is a high traffic area, so the perpetrator would not have had much time to scrawl their message.

Crews are on scene at Old City Hall, removing graffiti that someone shamefully hit the Cenotaph with earlier today or last night. Police are investigating this mindless act of vandalism. pic.twitter.com/egHvHkK0Zh

Toronto’s Chief Communications Officer Brad Ross called the act “shameful” and posted a video of a clean-up crew pressure-washing the graffiti off the monument. As of 1 p.m. the graffiti had been removed from the site.

Visited the Old City Hall Cenotaph to thank clean-up crews for their quick work to remove the disgraceful graffiti discovered this morning. Toronto Police & City security are investigating to catch those responsible for defacing this monument. pic.twitter.com/8WKVMfTGBP

Mayor John Tory made an appearance to thank the clean-up crew for their quick removal of the vandalization. “Toronto Police and city security are investigating to catch those responsible for defacing the monument,” he wrote.

Toronto Police were on the scene on Tuesday morning and have launched an investigation. Anyone with information is asked to call them at 416-808-5200.