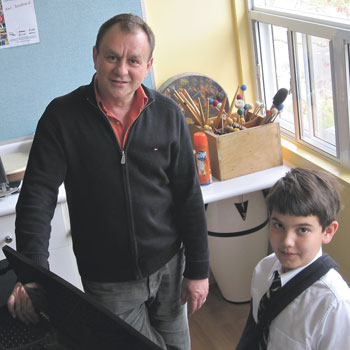 Thousands of voices singing in unison from coast to coast is certainly one way to get a message across.

Since 2005, the Coalition for Music Education has organized the Music Monday campaign. The annual event is held on the first Monday of May, in which groups across Canada simultaneously sing the same song to raise awareness for music education programs. Last year, more than 1,700 schools took part. This year, Toronto will be adding at least one more to the list, thanks to one little person proving he can make a big difference.

Ten-year-old Graeme Hambleton, a Grade 5 student at Sunnybrook School, first discovered Music Monday back in February. Motivated by his passion for music, he stood up in front of his school with a PowerPoint presentation in tow, preaching the benefits of music education and asking Sunnybrook to participate in the campaign.

“[Music] can help with social and brain development, and it is a great hobby,” Hambleton says.

In his presentation, he focused on “what Music Monday is, why we are doing it and how music is important.”

“He really inspired us,” says Sunnybrook’s vice-principal, Teralee Johnston. “It was really nice to see him have such passion and to really care about something and then to present it to our community.”

Students at Sunnybrook have been practising “Tomorrow is Coming,” a song written specifically for the campaign by Canadian singer-songwriter Luke Doucet. The students will sing the song at exactly 1 p.m. EST on May 7, while the rest of the country does the same simultaneously.

Thanks to Graeme’s initiative, Sunnybrook’s first Music Monday will be far from an ordinary assembly. The students will have the opportunity to sing along with guest performers such as Ron Sexsmith, Marisa McIntyre and others who are supporting the campaign. They will each sing a song and speak briefly about starting out in music.

The event is also a fundraiser — each child will bring a loonie to the assembly, and local and music industry businesses have been invited to match the money the students raise. All profits will be donated to the Regent Park School of Music, a not-for-profit music school that provides affordable music education for at-risk children.

“I benefitted from the incredible music programs that existed in this province, and they’ve been cut back severely — [they’re] actually really crucial,” says Fergus Hambleton, Graeme’s father, a Juno Award–winning musician who is also Graeme’s inspiration. Michael Ruffolo, Sunnybrook’s music teacher, firmly believes that music is a vital part of children’s education.

“Research shows that music education and music [are examples of] the most effective ways to develop skills,” Ruffolo says. “It furthers lateral thinking, it’s very logical and even math based …We’re really talking about things like fractions and ratios.”

Michelle Garlough, the co-founder of the Amici Music School in Toronto, says the benefits of introducing music to young children are invaluable. She adds it can develop with cognitive skills, hand-eye co-ordination, rhythm and speech and can also help children who have learning disabilities or can’t focus.

The Amici School of Music is currently finishing the first year of its Music Together program — where babies as young as six months are able to participate in music classes with their parents.

“Music is a really great source of expression for kids, and it helps with their confidence. Kids are our future, and I think that it’s important that we nurture all of their learning,” Garlough says.

However, not all children have access to quality music education programs.

Despite being influenced by some of her own music teachers as a child, Garlough says there weren’t a lot of opportunities while she was in high school because music wasn’t considered as important as other subjects like math or science.

“A lot of the time when cuts are made in schools, it often goes to arts programs first.”

According to the Canadian music education charity, MusiCounts, a 2010 national survey of over 1,200 schools reported that music is often the first “frill” to be cut.

But with ambitious children like Graeme, campaigns such as Music Monday have the potential to change the future of music education for generations to come.

Though he graduates from Sunnybrook in a year, Graeme says he would like to see the Music Monday campaign as something that the school will continue to celebrate for years to come.

“I hope they’ll keep on doing it,” he says. “[Music] gets people together.”