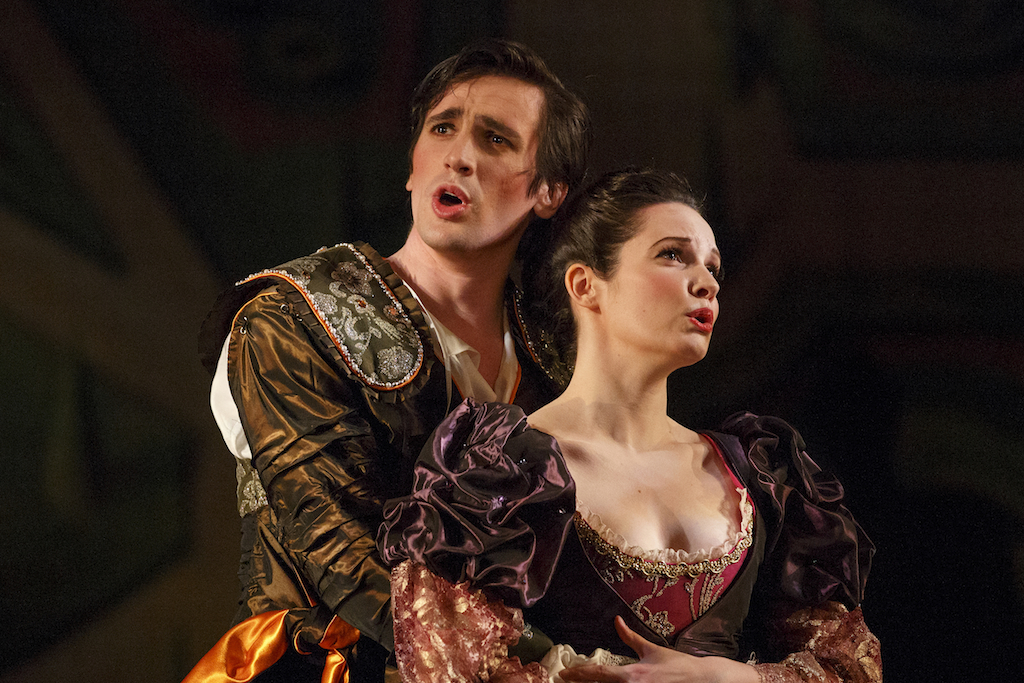 With many holiday shows going virtual this year, Opera Atelier has announced the livestream date for its fully-staged production of Something Rich + Strange which was filmed at Koerner Hall. The performance, which includes husband-and-wife team tenor Christopher Enns and soprano Mireille Asselin will premiere on Dec. 12 at 7 p.m. Here we caught up with the talented pair of singers to find out how they met.

Christopher: We met at an opera program in Edmonton in 2008 as students. We were both cast in J. Strauss’ Die Fledermaus and spent about six weeks together there before Mimi left for her master’s degree at Yale and I moved to Toronto to join the University of Toronto’s opera school.

Christopher: It wasn’t until 2011 when we were back in the same city — Toronto — together that we started dating. At the time we were working together at the Canadian Opera Company as young artists. Neither of us were all that interested in dating someone we worked with — let alone another singer — but the more time we spent together the more ridiculous that rule seemed to be. We can’t agree on what our actual first date was, it might have included ice cream and a walk on the beach, barbecue and rock climbing in the west end, or a very tasty meatball sub. It was a gradual progression from friends to something more over those months.

Mireille: When we started dating, my roommate like to joke that she put on 15 pounds from all the treats Chris would bring over. He’s a great baker (growing up Mennonite will do that to a person) and he definitely expresses his love by feeding people (growing up Mennonite will do that to you, too!). But really the thing that was most memorable was how little courtship there was. We just both kind of knew that if we started this thing that it would probably be it. So it took us a little while to get up our courage, but once we started it just kind of became a fait accompli.

Mireille: I was away from home in New York City for a gig, staying in a really lovely apartment overlooking Central Park which was generously offered by a supporter of the arts group I was working with. I kept telling Chris he should come enjoy New York — and that view — with me, but he claimed to be too busy to be able to make time. But lo and behold, on the second day there was a knock on the door, and there he was with a ring and a coffee. I’ll spare you the mushy details, but needless to say it was an easy yes from me.

Christopher: We got married two years ago on my family farm in Manitoba. It was a real treat to have friends and family from all over the world converge on the place I grew up. The Manitoba weather cooperated not only with a beautiful day, but no mosquitos (I don’t know how we got so lucky) and my dad pulled out all the stops to make sure the yard was ready. He even planted a field of canola three weeks late to make sure it would be blooming on the wedding weekend. His neighbours thought he was crazy, but it was a perfect backdrop for everyone’s photos.

Christopher: We took less of a honeymoon and more of a honey-year. Three months after we got married, we rented out our apartment and hit the road. Mimi had gigs in Europe for most of the year, and so we travelled together living mostly in France and the U.K. for the next 10 months. Officially, there was a week-long trip to a cottage in Mull, Scotland that we call our honeymoon, but the whole year was an adventure.

Christopher: When we met, we were both singing full time. That means a lot of long distance, which is really challenging for any relationship. One of the things that helped was setting aside money every month for a joint travel fund. We used this co-money to visit each other as much as possible. That kind of flexibility has been key to us balancing work and our relationship. As the years have passed, months of long distance have been less palatable, and so we spent as much time on the road together as possible. It’s been often more expensive, but like many opera families, the costs are well worth being able to bring home to wherever you are.

Mireille: Finding a partner who truly understands the rigours and demands of the business has been key. We never have to explain why a certain gig is important to take, or why we practise at crazy hours. Chris has also specifically built a business that is portable — he does financial planning for artists and other creative types on top of his singing — so I really credit him for finding a way to bring our life on the road and rolling with all the punches.

Christopher: In March of this year, we left our Toronto apartment at Gerrard and Broadview and moved to Almonte, a small town just outside of Ottawa. We loved our time in Toronto, but it was time for a change. Mimi’s family is from Ottawa and Almonte is a really fun, artsy and foodie town in a beautiful part of the country. We’re getting to know this new rhythm and the ways of this quirky old house we now call home.

Christopher: We just like each other quite a bit. I’m not sure how others can emulate that, but it’s sure helpful. We’re really lucky that after almost 10 years together, we seem to be finding more things in common, more things we want to try, and more things that we like to do together. I think we’re also really lucky to have good people around us. Friends and family that support us both as individuals and together. That sure helps a lot too.

Mireille: And kindness and generosity of spirit is so important. We are always kind with one another and try to live by a term coined by a few dear friends — a vicious circle of empathy. We’re always looking out for one another, and that has fostered a really loving and caring partnership.