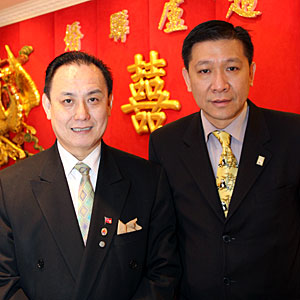 “CANTONESE IS THE best Chinese food in the world,” claims Emperor Fine Chinese’s owner and manager. “We take the best from every different kind of Chinese cuisine and make it our own.”

Overwhelming does not begin to describe the choice. Comparatively, the large main banquet-style room is generally calming — save for a few oddball decorative touches such as the disco ball and multiple rings of neon lights (blue, red and yellow) that set off a recessed ceiling and two unlit ornate chandeliers.

The set meal for two people was created months ago ($68), but it remains their most popular dinner special. And although the plates cover much ground, the various elements are only sometimes successful.

A bowl of fish soup brings a broth dense with bits of crabmeat, whitefish, fish maw and egg. A few dribbles from a separate ramekin of watery, but kicky, sweet dark vinegar completely changes the overall flavour and colour.

The most interesting and unusual dish of the evening is also the most impressive and flavourful. A seemingly endless amount of scallop, shrimp, whitefish and cheese in curry seasoning hides within a conch shell. Baking renders the top layer somewhat crispy. A real triumph! A single fresh crab claw acts as a delicate handle for a ball of tightly packed crabmeat, the lot expertly battered and deep-fried.

More deft deep-frying contributes to the goodness of a main of battered, deep-fried sole pieces over balls of cantaloupe and green melon in a bird’s nest basket made with rice flour. The fish is well timed, the fruit fresh, and the nest airy and grease-free.

A dotted line of excellent candied walnuts and sesame seeds separates the nest from the other half of the plate: half a lobster and claw under a glut of garlic and scallions. The crustacean is immaculately cooked, but the flesh lacks that natural sweetness.

The other half lobster appears with our second main: another bird’s nest cradling fantastically fresh snow peas and cubes of the most tender beef in a mouthwatering teriyaki basting. The meat yields to a fork without a hint of resistance. A sprinkling of toasted sesame seeds tops all.

Pineapple-fried rice fills the starch quotient. Much can be said about the variety of textures and colours — crosscuts of kai-lan (Chinese broccoli), egg, pineapple, pine nuts — but overall the dish falls flat in the flavour department.

The attention we received from the small army of efficient servers feels genuine. A popular dim sum lunch fills both rooms midday.