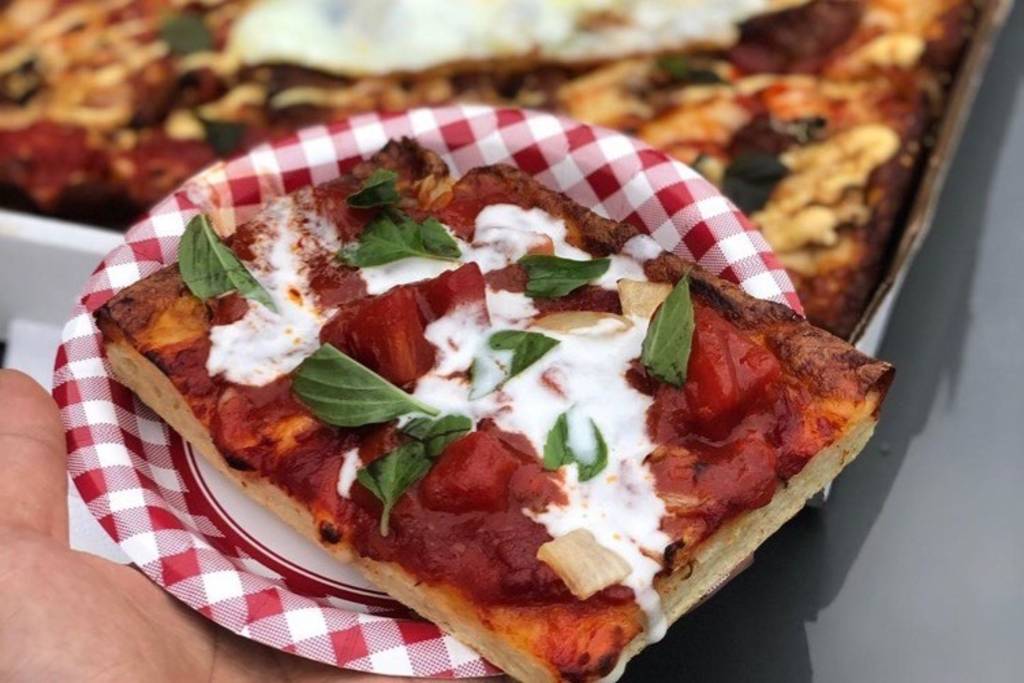 Detroit-style pizza seems to be having a moment in Toronto. Descendant Pizza was the first to bring this deep-dish style to the city back in 2015. More recently, Grant van Gameren got into the Detroit-style game, converting Tennesse Tavern into Gianna’s Patties and Pies. Now, Pabalos Island Pies is bringing a Filipino spin to the popular pizza style with its new pop-up in the west end.

Owner Sean Santos says he originally came up with the concept several years ago when he was asked to create a menu for a friend’s art show. “We decided to revisit the idea because during COVID we had a lot of down-time, we had access to a space, and we thought it would be a fun project to take on,” says Santos.

Pabalos Island Pie is currently operating out of the Wallflower restaurant on Dundas West. Santos had collaborated with the owners on previous projects, and with the restaurant temporarily closed amid COVID, they agreed to offer up the space for this pop-up.

Our Longanizza pie aka the #bespren. With our longanisa sausage mix, roasted onions, and a fried egg. This pie will definitely satisfy any appetite and than some. Come by and check us out this Sunday Aug 2 @wallflower.toronto #pinoyfood #panpizza #grandmapie #torontofood #torontopizza #torontopopup

Although Pabalos’ self-described “island pies” are best compared to Detroit-style pizza, Santos says the flavour profile is quite different than traditional pizza.

“Our dough is a little bit different,” he says. “We add rice flour to it to give it a bit of a chew. But we still get the crispy edges and the crispy bottom that are synonymous with Detroit-style pizzas.”

“Pizza is the perfect vessel to put whatever toppings you want on it,” says Santos. “And this hadn’t been done yet, so we thought that it would be a great idea to showcase our cuisine and other Asian-inspired cuisines.”

The Pabalos pop-up is currently running on weekends, but Santos says they’re taking this upcoming weekend off to strategize for adding more days to their schedule. The team is hoping to start running the pop-up a minimum of four days a week when they return.

Santos says they’ll continue operating out of the Wallflower for as long as possible, but he thinks the concept could easily move to other restaurants, breweries, or even a ghost kitchen in the future.

“We want it to happen organically and let the people who are eating it dictate where we go with it,” says Santos. “People are just starting to get to know it. The response has been great, and we’re just wanting to grow that and focus on putting out a consistent product.”