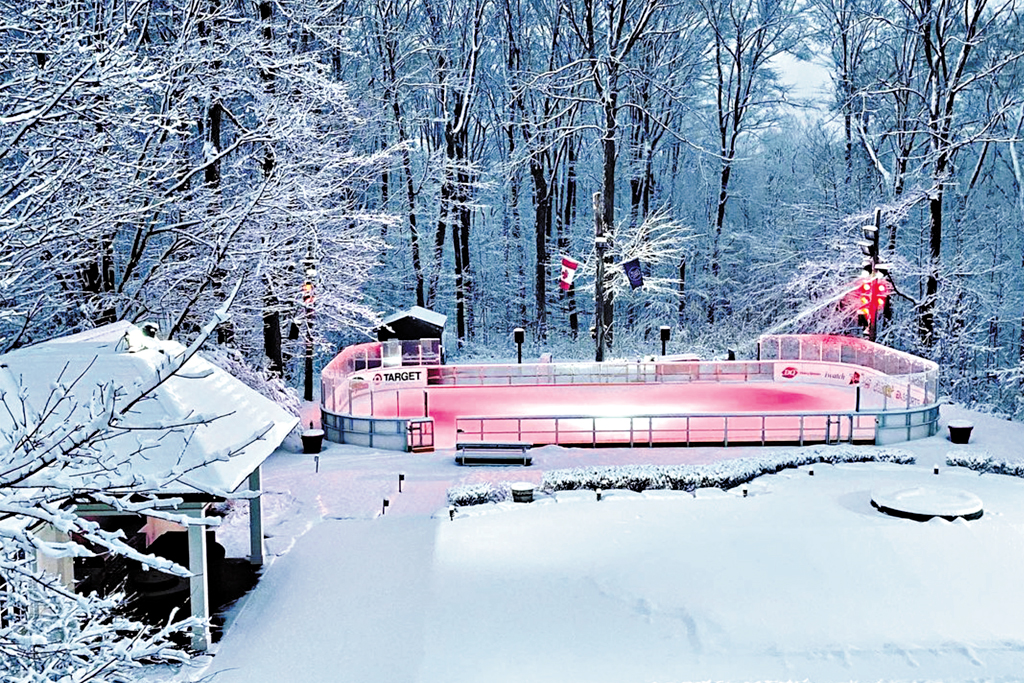 Forget the breadmaker, the once novel backyard ice rink has become the new pandemic home staple for Torontonians trying to fight boredom and stay active. Backyard rinks have been an under-the-radar trend in Toronto for years, but this winter, pandemic-motivated sales have catapulted the industry into the mainstream.

Toronto local Noah Roelofsen runs RinkBuild, a backyard rink-building business that his father started in 2012. The 22-year-old, who took over the company this past year, said he started off the season thinking he would build rinks for “a couple of friends,” and now he has a team of 10 working almost every day.

Although the trend has gained popularity this year, some have been backyard skating for years.  David and Elise Weiss built their backyard rink in 2013, which looks more like a miniature outdoor Maple Leafs stadium.

David said that for years it was “a family rink” — aside from a quick visit from Justin Trudeau in 2015 — but in November 2020 a rink picture Elise posted on her Instagram went viral.  The post was shared by the NHL and garnered more than 231,000 views.

Elise said, after that, the messages started rolling into her Instagram message inbox.

David said people began reaching out to the couple with “very compelling stories requesting the use of our rink” and “some were very heartful. So we decided to offer our rink to complete strangers.”

Elise began vetting some of the responses, and they set up a schedule allocating four to five hour-and-a-half- to two-hour-long slots throughout the day to different groups.

“The satisfaction we got was seeing them on the rink going nuts,” David said.

He said rink use wasn’t just for hockey. There was figure skating, a romantic date and even a proposal. In response, the couple received an outpouring of gratitude from their rink visitors, and David said their neighbours responded warmly.

“We didn’t really abuse it,” he said.

David said there weren’t lineups outside or big crowds and that their 85-foot-long home rink, located on their lot at Avenue Road and Highway 401, is set back from the surrounding neighbours.

Roelofsen said this year the trend took off and by mid-January he had already built more than 100 new backyard rinks in the city. He said the number doesn’t account for their returning clients.

“We have tons of people who we do rebuilds for every year,” he said.

Roelofsen said the majority of the rinks he builds are off Eglinton Avenue and Lawrence Avenue, but he also built a few rinks in smaller lots in the Annex.

“The smallest rink we’ve done is a 12 by 12,” he said, adding that the company’s rinks are entirely customizable.

Not everyone in Toronto has had as positive an experience with backyard rinks. Post City Magazine staff spoke to a couple who live next door to a backyard rink (not the Weisses’ rink)  in an urban neighbourhood with smaller lots who asked to remain anonymous over conflict concerns with neighbours.

The couple said that living and working next to a hockey rink has been trying and interferes with their ability to work and for their children to study from home, which is a pandemic necessity for many.

“It’s a nightmare; it’s like living in a hockey rink,” the man said.

Roelofsen said he has heard of similar complaints, and in response, his company has created custom mesh fencing for hockey rinks to minimize the sound of slapshots.

But the noise isn’t the couple’s only issue.

“There are lots of kids coming into the backyard,” the woman said. “No masks, no social distancing. This is not the correct interpretation of a stay-at-home order.”

She said there seem to be no time limits on the play, that it happens morning, afternoon and evenings, at times until 9 p.m.

“As a homeowner, I chose not to live right near a park, but the park kind of came to me,” the man said, adding he’s sympathetic to the need for outdoor time: “I understand the need for kids to play. I was one a few years ago.”

But he wants some kind of time constraints or restrictions on noise levels. He said he contacted the city looking for guidance but received little help.

“I feel like the city is playing no productive role in this,” he said. “It seems like there are no rules of the road or template people can follow.”

Josh Matlow, councillor for Ward 12, where the above and many other backyard rinks are located, said bylaws make sure people aren’t making noise in the middle of the night.

Aside from that, Matlow said, “What you do for recreational purposes in your backyard is the business of the people who have the backyard. Currently, the city’s bylaws don’t prohibit people from playing sports of any kind in their backyard.”

However, he said these bylaws were written for “normal times,” not for a pandemic, and he thinks it is clear people should not be having friends over to skate in their backyard.

“If your relationship with your neighbour allows for this, speak with them and express to them how it’s impacting your quality of life,” he said.

But the couple said this approach does not always work.

“I don’t think the city can assume that all neighbours will be considerate of each other,” the man said. “I think guidelines need to be clear and strong because, if you are leaving it to neighbours to resolve things among themselves, then it is fraught with peril.”