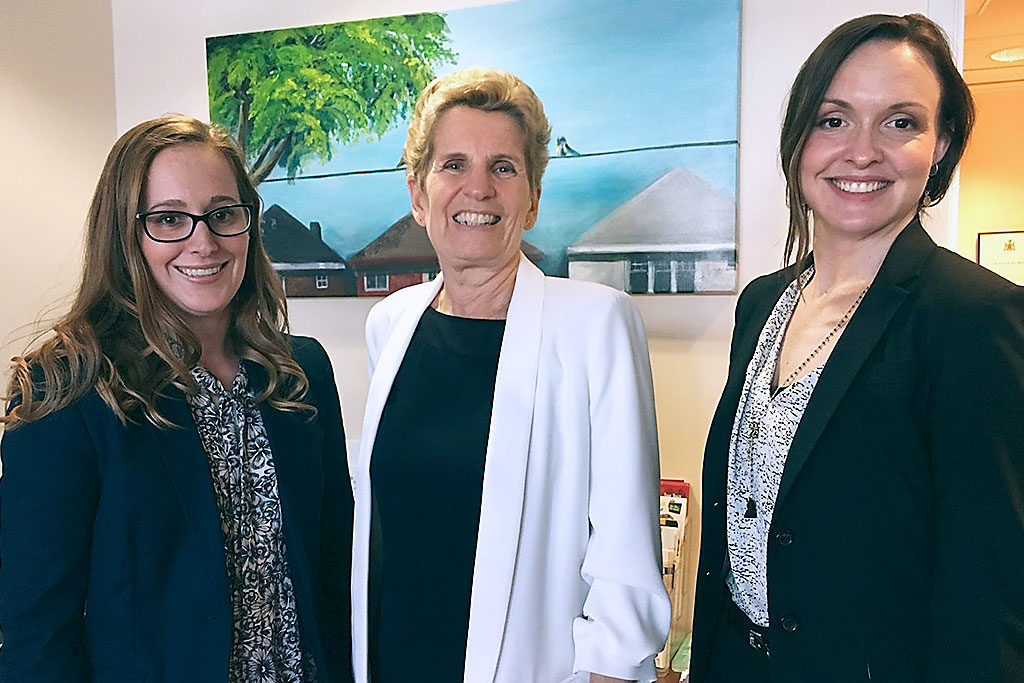 A number of parents with children enrolled at Eglinton Junior Public School say the Toronto District School Board (TDSB) isn’t working hard enough to acquire property that could significantly reduce overcrowding at the school.

The group met with Ontario Premier Kathleen Wynne — who also serves as the MPP for Don Valley West — TDSB trustee Shelley Laskin and councillor Josh Matlow to discuss the potential acquisition of the plaza at 744 Mount Pleasant Rd., next door to the school, in late April.

Eglinton Junior P.S. currently operates at 113 per cent capacity, with 574 students and enrolment projected to increase to 820 students (147 per cent) by 2024. The school sits on a 1.6-acre site that is too small to accommodate portables. A retrofit will create two new classrooms by September, but the TDSB has noted the additional space is still insufficient to address enrolment growth.

“The existing commercial plaza at 744 Mount Pleasant Rd., south of Eglinton Junior P.S., of approximately .57 acres, could be a midterm solution,” Laskin said.

If the Mount Pleasant property were acquired by the TDSB, Laskin said the site would be able to address the existing shortcomings of the school site, ensure appropriate program space and the additional acreage would provide the school with much-needed play space that it currently lacks.

However, Laskin said the TDSB will hold off on making an offer until the land is put up for sale.

“The potential acquisition of this property has been explored by the Toronto Lands Corporation (TLC) and the property is currently not for sale,” she said. “Should it become available, I will be requesting the TDSB seek approval to purchase it through land acquisition funds from the Ministry of Education.”

Lindsey Walton, a local resident whose child attends Eglinton Junior P.S., said Laskin is not working hard enough to secure the site. At the meeting, Walton said parents were assured there was $100 million of funding available to the TDSB to cover the cost of land acquisition.

“That’s what is infuriating to us. You have to contact the owner and push the sale forward.”

“There is money to buy property that’s just sitting there, and they are not doing anything about it. There is no proposal and there is no ask from them,” Walton said. “That’s what is infuriating to us. You have to contact the current owner and push the sale forward. She’s not doing anything.”

It’s no secret the Yonge-Eglinton area is facing rapid intensification. The Crosstown light rail transit construction has paved the way for many development proposals currently in the pipeline, and cranes continue to pop up at new construction sites nearby.

Councillor Josh Matlow, of Ward 22, St. Paul’s, said the population pressure presents a significant challenge for the TDSB and the group’s proposal is a viable solution.

“I can’t imagine a more perfect location. If there’s a space directly adjacent to an existing public school, why wouldn’t you want to use it?” Matlow asked. “I think its just inane that in front of a condo proposal, the TDSB has to put up signs saying your kid may not even be able to go to a local school. That’s bad planning.”

Laskin noted that even if the TDSB were able to acquire the property, it would only solve part of the problem.

“Although tremendously valuable for Eglinton Junior P.S., the acquisition of the plaza does not address our long-term issues in the area. It is possible there will be a series of requests for land acquisition in the Yonge-Eglinton area in the near future,” she said.

A boundary change for the area has also been conducted, to move 40 students living south of Eglinton Avenue East and east of Mount Pleasant Road to Maurice Cody Junior P.S. for September 2019.

Due to the large number of residential units proposed or under construction in the area, the TDSB also initiated a larger review to explore further boundary, grade or program changes and an analysis of the Bannockburn property, a former  school at Avenue Road and Lawrence Avenue West, which could accommodate up to 300 students.