Passionate songs of protest and peace with Buffy Sainte-Marie | TRNTO.com
Skip to content 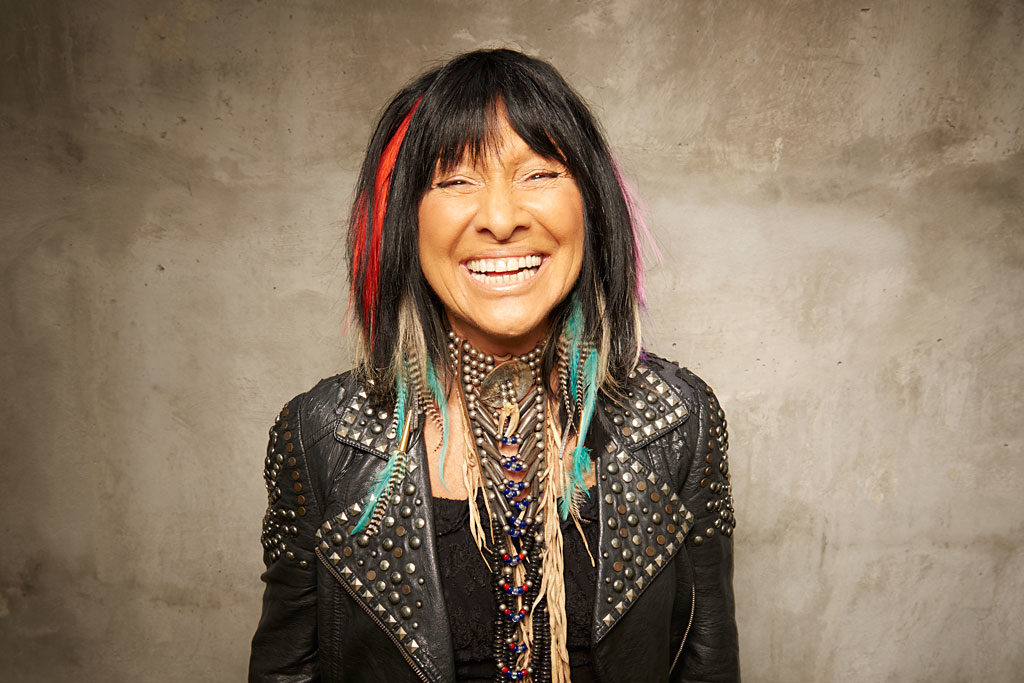 Buffy Sainte-Marie has been singing songs of protest, peace and understanding for more than a half century. She’s inspired or woken up countless people along the way. Who better to speak with to kick off our issue highlighting inspiring women?

You wrote one of the most iconic protest songs in history. Tell me the story behind “Universal Soldier.”
I wrote that song in the San Francisco airport. I was trying to get to Toronto for a show at the Purple Onion in Yorkville in 1962 or ’63. I was coming from Mexico and had to spend the night at the San Francisco airport. In the middle of the night, a bunch of medics start wheeling in wounded soldiers, you know on gurneys and wheelchairs. I got to talking to the medics and thinking about who was responsible for war because, you know, we were told there was no war and us hippies were crazy. They convinced me, yeah there was a horrible war. I just got to thinking about who was responsible for these poor guys who were lying there.… So I wound up writing this song and debuted it at the Purple Onion coffee house when I got there.

Did you spend a lot of time in T.O. back then?
Toronto is one of the places I loved coming to, and I’ve always played here, and I’ve lived here several times. I have a soft spot for Toronto.

How did you end up living in Hawaii?
I was playing a concert in Honolulu, and I asked the travel agent to send me a couple of weeks early, and I just fell in love with the outer islands and bought my place immediately. And I’ve been there ever since.

Anywhere near Willie Nelson?
No no, different island, much more remote. I live in the mountains on a goat farm.

What gives you hope?
That not everybody goes along with some of the ridiculous moves that are being made in the States these days. Not everybody believes in that even though they are trying their best to get away with what they want to do. You know, getting blacklisted in the ’60s, sometimes people will say well doesn’t that make you hate the U.S. government? Well, the U.S. government really had nothing to do with it. It’s a handful of guys that make up an administration, and they work with their cronies who are like-minded, and they are in office for a little while, and at best, I guess it can be a learning experience.

How can music help make change?
Well, Medicine Songs is the name of my new album, but it’s also a way of thinking. Positive songs, protest songs, songs that inform people — you know we might not cure cancer, but we might be somebody’s vitamin C. We might make life better for people who are thinking about this for the first time or people who have been thinking about this a long time. I think songs can help a lot. I think a song can be more effective than a 400-page textbook that winds up on the shelf that nobody ever reads.

What do you make of the current political climate in the United States?
Oh god, you know, we’ve survived bad leadership before, and we can survive bad leadership again. I mean, we had Harper in Canada, right? And there have been crazy people. He’s not there now, so things can change. But when people go to sleep thinking everything is just fine, you know, the termites are chewing on your rafters all the time, and things can happen. But, you know, we’ll survive it.

What are you hoping people take from your new album?
Really I am trying to put these songs to work. Some are new, some are old, but they are all about contemporary issues, contemporary before and some, unfortunately, are contemporary again. You know, we still have oppression in Canada. We still having missing and murdered [Indigenous women]. We still have slavery. We still have all kinds of inequity between rich and poor. We have people worrying about what’s going to happen to their kids. And hopefully this album will inspire listeners to think a little more. And to realize it’s not really hard to figure out…. You don’t have to have a revolution. You can be a revolution in your own family.

Wise words.
The Dalai Lama says we always have the best tool for peace with us at all times, and that’s a smile. It’s nothing new, but we need to be encouraging each other to enjoy making the world a better place because it really is a privilege.