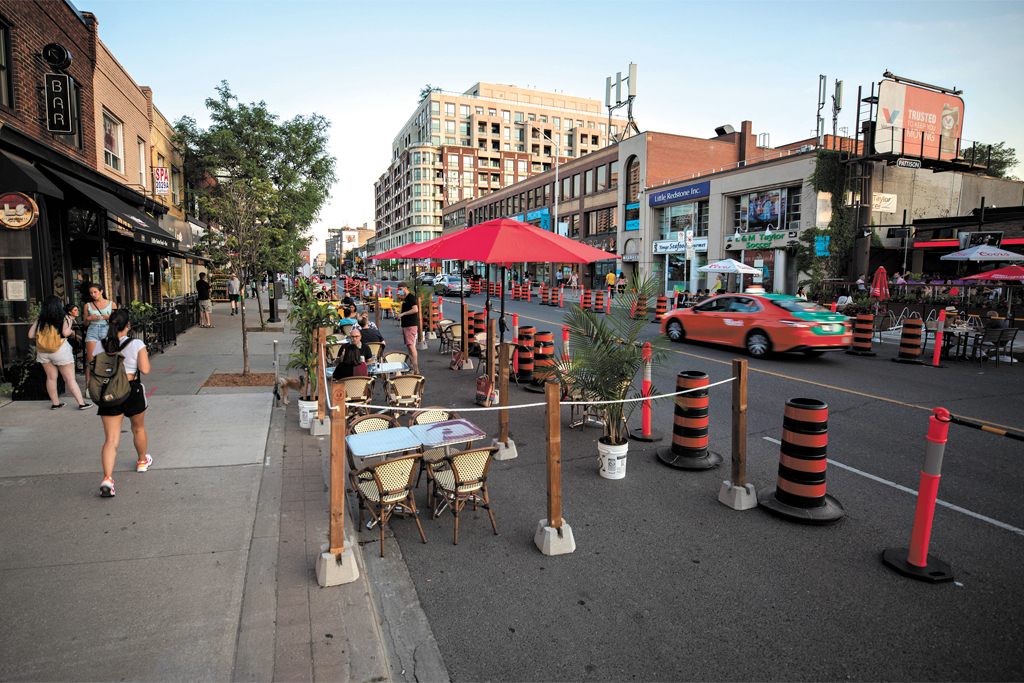 At first I wasn’t sure what it would be like to dine in the street, but, as it happens, enjoying a meal on a restaurant patio that extends onto the sidewalks or into the street is quite pleasant.

Outdoor patios are a common feature in many European cities throughout the year but, until recently, not as widespread in Canadian cities. In an attempt to help restaurants stay viable in an era of reduced capacity and limits on indoor dining, many cities relaxed the patio rules and included the ability to set up tables and chairs in the streets. In Toronto, the city bureaucracy moved quickly to loosen the rules, and restaurants have embraced the opportunity. New patios are popping up on sidewalks and streets throughout the city and midtown is no exception.

In addition to the new rules, the city is helping to offset the costs of setting up the patios by paying for the cost of barriers and planters. Restaurants that are within an established business improvement area (BIA) have the flowers paid for and maintained by the BIA.

In midtown, Sip Wine Bar on Yonge Street had struggled for years to get a patio licence because the space is on the side street, not Yonge. Since it was on the side street, the city required that a majority of residents on the street had to agree before any permit could be issued — not an easy task. So Sip had been denied the permit — until this year. The patio is wonderful and will likely become a permanent fixture for the area.

In another case, there was a bus stop directly in front of a restaurant, which made a patio impossible. The city reviewed the location of the bus stop and determined that it should be moved — not just to facilitate a patio, but because it wasn’t in an optimal location.

The patios near Yonge and Eglinton have double concrete barriers as a precaution amidst all the construction, and the city waived a previous rule that prohibited a server from walking across a public right-of-way to serve alcohol.

Luckily, we have had an incredible summer from a weather perspective, with only a few rainy days that rendered dining on the patio unappealing. Since indoor capacity limits will likely be in place for some time, patios will become increasingly important for restaurants. Currently, patio licences are set to expire in November. As we move into winter, hopefully the city will consider extending those licences.

Year-round outdoor patios are not new to Toronto, but those patios are typically on rooftops with overhead protection. The challenge for the city and restaurateurs will be to design all-weather patios that can withstand the cold and dreary winter days and nights. At present, the city is taking a hard line against propane heaters for outdoor patios on the public right-of-way because the risks are deemed to be too great. Without any type of heater, outdoor dining in the winter would be rather unpleasant.

Hopefully the same spirit of flexibility and ingenuity that existed over the past few months can be found over the next few months because patios are becoming increasingly important for restaurant owners as well as the first choice seating option for customers.