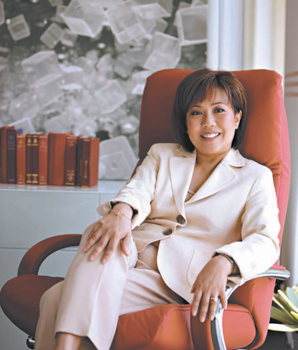 PAULINE CHAN SETTLES into her seat beside Ken Shaw at the brightly lit anchor desk. Toronto’s skyline is etched on the wall behind the pair with the CTV logo hovering above.

Chan glances over some papers, then fans herself with them. A red light on the camera lights up, she straightens, then begins talking: “Good evening. Here’s a look at the top stories.”

As the co-anchor for CTV’s nightly 11:30 p.m. news broadcast — a post the longtime Bayview resident has held for the past 12 years alongside her regular co-anchor, Bill Hutchison — Chan has become a familiar part of many Torontonians’ lives.

Tonight, she’s also anchoring the earlier 6 p.m. broadcast, filling in for Christine Bentley alongside Shaw, a duty she performs regularly. When I arrive at CTV’s headquarters, Chan, dressed in a smart rosecoloured jacket, floral dress and heels, greets me with a warm smile and takes me on a tour of the newsroom, graciously introducing me to various members of the team.

In person, her voice is slightly higher and softer than when she’s anchoring the news, but the easy smile and personable demeanor are just as genuine.

When she’s at her regular gig, the 11:30 p.m. newscast, she’s paired with Hutchison. They’re “the perfect team,” she says, not just for their easy rapport as newscasters, but also for their mutual love of food.

“Most of the people around the station do their running and yoga and Pilates. Bill and I are regular patrons of Lick’s and McDonald’s,” she says with a giggle. “We’re awful. Between us, if we have a box of Girl Guide cookies, I’ll eat all the vanilla, and he’ll eat all the chocolate. We are such a perfect team.”

It’s the morning after a broadcast, and the 44-year-old mother of two greets me at the door to her spacious home near Bayview and York Mills for another interview. She’s in slacks, a T-shirt and flip-flops, looking just as radiant as she does on TV if not more fresh faced without the high-definition makeup.

“I’ve been living in this area for a good four decades,” she says, glancing out her living room window to the tranquil, tree-lined street. “It’s very familiar. It’s home. If the kids go outside and play basketball or ride around or write on the sidewalk with chalk, it’s really safe,” she adds.

In fact, Chan grew up at Leslie and Lawrence, about a five minute drive away, and has lived in the area ever since. “This is coming up on our third year in this house,” she says of the 30- year-old Shane Baghai–designed home, which she and her family upgraded to from their previous house just around the corner at York Mills and Don Mills.

Being shrouded by nature but with easy access to the city’s major traffic arteries is a big reason the area is so popular, she says. “I just take the 401 to the station, and my husband uses the Don Valley Parkway to get to work downtown,” she says.

When it comes to dining out, Chan and her clan head to Oliver & Bonacini at Bayview Village. She’s also developed a habit of stopping in at the Town Shoes and the Shoe Company warehouses on Lesmill Road before picking up her kids at school nearby. “I always pop by there a little early,” she confesses with a giggle.

After attending high school at Havergal College, where she was involved in dance and theatre, Chan, a single child, went on to study English and drama at the University of Toronto.

It was there that she found not only her calling in life (through campus radio), but her partner in life, Keith, too.

“We were in a production called The Bob,” she recalls fondly. “It’s named after Bob, who was the caretaker of Victoria College. So they named the college review show after him. It was dancing, singing, comedy skits.”

But the pair didn’t begin dating until several years after their graduation in the late ’80s. Both were busy forging their respective careers, him abroad in business, her at home in broadcasting.

After going on to study journalism at Humber College, where she graduated at the top of her class, Chan worked her way up the broadcasting ranks, starting out as an intern at Global News, where she cut her teeth in news writing, followed by six years as a reporter with CTV and finally landing the coveted anchor desk in 1997.

That same year, she and Keith married. Three years later their son was born, followed by a daughter a year later.

Today, Chan’s life clearly revolves around her family. “I get the kids ready for school, take them to school,” she says of her daily schedule, adding, “If someone forgets their science project or gym shoes or has a tummy ache, those are things I can take care of during the day. If they have a field trip and want parents to go with them, I’m available for those things.”

It’s her evening work schedule that affords her the time to be there for her kids during the day. Chan’s workday begins at 4:30 p.m. and ends at 12:30 a.m. “I’m not really required for the six o’clock news, but Bill and I are there just in case anything breaks and they need someone to put something together,” she explains.

Following the 6 p.m. news, they begin researching and writing for their 11:30 p.m. broadcast.

“We have to shrink a lot of the stories down, update them, that sort of thing,” she explains. “I love that you get to put a picture together of a day in the life of Toronto, and you get to present that to the audience,” she adds, of what she loves most about her job.

A self-confessed perfectionist, Chan says, “I’m a Virgo, which is why, when I come home at 12:30 a.m., I’m still picking up toys and doing laundry and folding things and refolding things that other people have folded. I’m awful that way.”

Back at the CTV studios, the hour-long newscast is drawing to a close. “Good night. Thanks for watching,” says her coanchor into the camera. “See you later,” adds Chan.

With that, the TV cameras in front of them turn off and the bright studio lights are dimmed. “Was that your first time seeing a live broadcast?” she asks me as she steps down off the podium. “Did you enjoy that?”

Even after 12 years, it’s refreshingly clear that she still does.