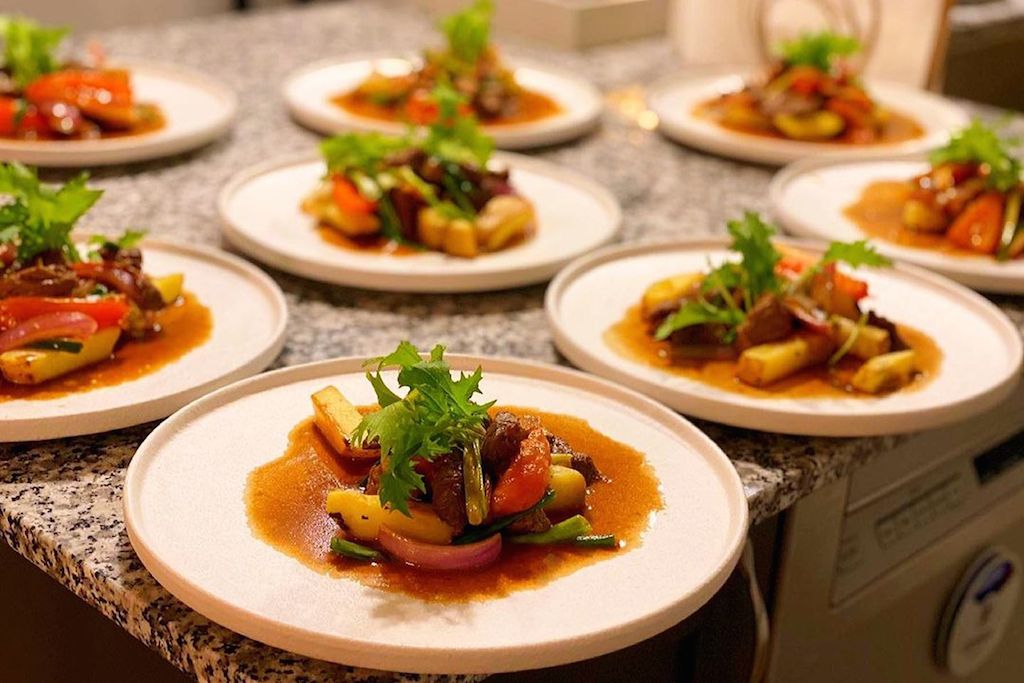 “Toronto is a city that loves ethnic foods,” says Elias Salazar. Having emigrated to Toronto from Peru in 1996, he felt like he could meet his new neighbours in the middle, bringing them his traditional Peruvian cuisine in ways that they can appreciate.

His culinary journey in Toronto began with Kay Pacha, which opened in 2017, and then a Kensington Market pop-up in the summer of 2019. After that, he did a Mrs. Robinson kitchen takeover, followed by a few other teasers and small ventures.

But, now, Salazar is opening Waska Peruvian Chicken, which will offer a host of delicious traditional Peruvian fare, including tamales, empanadas, rotisserie chicken, and Lomo Saltado, among others.

The rotisserie chicken (halal) comes in a whole or half-chicken serving and comes with a side and a choice of five sauces including huancaina, yuzu mayo, and Peruvian-style chimichurri.

The restaurant on Dovercourt Road holds a special place in Salazar’s heart.

“I always wanted to bring this concept to life. I have opened and launched other concepts, but this one is special,” he says. “The chicken recipe is a family recipe, so people can expect Waska to showcase the amazing flavours of Peruvian ‘Pollo a la Brasa.’”

But that isn’t the only family recipe that will be showcased in the new restaurant.

“Another goal of mine is to be able to offer many traditional dishes that you wouldn’t see on a Peruvian restaurant menu,” Salazar says. “I have a book with over 100 recipes that my grandmother passed on to me, dating back to my great grandmother. I want to be able to give everyone the opportunity to see the diversity in authentic Peruvian cuisine.”

Paying homage to his grandmother’s recipes is especially important to Salazar, as she was his inspiration and his introduction to cooking.

“I had an amazing grandmother that instilled my passion for cooking,” he says. “I recall my first experience with her in the kitchen. She would ask me, ‘do you like to cook and help in the kitchen?’ Because I would always ask her questions about certain dishes, so one day when I was nine years old she said, do you want to stay and cook with me instead of going to play soccer outside? And that was it, we started to cook together after that. And It was chicken soup — still my favourite! I miss her every day.”

Chef Salazar is also classically trained and has worked in restaurants in Lima, Peru; Miami; and Montreal, in addition to Toronto.

Today, Salazar knows how to make more than 100 types of Peruvian ceviche, classifying it and any type of seafood as his signature dish. So, of course, Waska Peruvian Chicken will offer ceviche options amongst the other dishes from the six types of Peruvian cuisine in which Salazar specializes.

The classic ceviche uses snapper as the main ingredient while “Leche de Tigre” has a combination of shrimp and octopus.

The restaurant also features another Peruvian staple, the causa, which is a whipped potato terrine. There are two on the menu at Waska.

In addition to whipped potato, the Limena adds aji amarillo and fresh lime and is topped with pulled chicken breast, yuzu mayo, avocado, tomato, and botija oliva. While La Vegetariana swaps out the pulled chicken and replaces it with beets and edamame.

“The menu for Waska Chicken is a combination of my knowledge of the cuisine, my knowledge of Peruvian chicken, and what I know people in Toronto will appreciate,” he says.

Of course, opening Waska came at a bit of a difficult time, and Salazar faced multiple hardships.

“I had plans to open a restaurant in March of 2020, and the pandemic really took all of that away. I know it has been hard for all of us in this industry,” he says. “I had to regroup and launch a different concept that would be pandemic proof — 2020 was the most difficult and challenging year in my 26-year career.”

Luckily, Salazar got by with a little help from his friends.

“This was all possible through a close group of friends — they are like family,” he says. “Knowing the situation that most chefs and restaurant workers were going through, they decided to give me the opportunity to revive Waska through this beautiful space at the Dovercourt House,” he says.