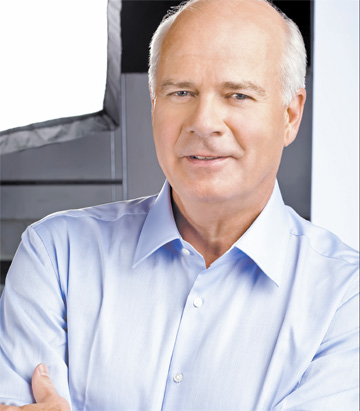 FOR OVER 20 years, Peter Mansbridge has tucked the nation in at night as host of The National, leaving us safe in the knowledge that while everything may not be right in the world at least he’s trying to figure out why.

And now, with The National having just undergone a top-to-bottom makeover, viewers will be seeing a different side of Mansbridge — or at least a different angle.The re-branding of CBC Newsworld as CBC News Network (or CBC NN, for short) sees Mansbridge delivering the news standing, not seated behind his desk as we’ve come to know him. But that’s not all that’s afoot.

“It’ll look different. The set’s different, the music’s different,” says Mansbridge. “But you don’t change the way you go about doing the news. I mean, the news is the news. We still focus on the stuff that we think is the most important news of the day. And we put it in context, lay it out and let people make up their own minds.” Canadians are a relatively adaptive people, but in changing the format, the CBC is playing with fire, something Mansbridge is fully aware of.

“One time when we changed the music, we got a flood of letters from people saying stuff like, ‘This is outrageous! My dog won’t go to sleep any more — it always went to sleep when it heard the theme to The National.’We’re going, ‘What do we do about that?’”he says with a laugh.“They may find the change a little jarring.” Being the most trusted face in news is a big responsibility, especially for someone who technically didn’t even finish high school.

“That was 1966. I didn’t get my senior matriculation,” says Mansbridge. “I’d probably still be there trying to get my Grade 13. I’d mentally checked out of school.”

Mansbridge gives the impression that underneath the perfectly tailored suit and behind the steady voice there still lies the curious, brave and rugged journalist who found his calling after setting out for a life of adventure while still in his teens.

“So I joined the navy. I went out west and was in the navy until 1967,” he explains. “It was a way of furthering my education but doing it in a more adventurous way. It didn’t work out, but I had a lot of really good times there.”

Not ready to return home after his service, Mansbridge travelled to the Manitoba outpost of Churchill to work for an airline as a jack of all trades. He refuelled airplanes, announced flights and loaded baggage in minus-60- degree weather.

“One day I was announcing a flight in the terminal. A guy heard me. He was from the CBC, and he offered me a job there,” Mansbridge says. “I mean, this was back in the ’60s, and they couldn’t get people to go up there.”

Mansbridge began by working the late shift as a DJ. He admits he wasn’t very good at it, but it built his confidence to the point where he could be a radio broadcaster.

“I had never thought of it as a career.

Mansbridge made a name for himself, gradually moving south to Saskatchewan, transitioning to television and establishing himself as a correspondent for The National.

It was while at The National that Mansbridge met the man who would shape his career, Knowlton Nash. “He was like a mentor to all of us,” Mansbridge says. “When he was anchoring the program, he’d been there for 15 years, and he’d been a foreign correspondent, then a manager, then an anchor.”

By this time, Nash was nearing the end of his esteemed career and knew he would soon cede his post as anchor. There were many promising young broadcasters to choose from, but Nash wanted Mansbridge to take over for him, something he made quite clear.

“At that time, I’d received a great job offer from the States,” says Mansbridge. “The offer was from CBS. It was their morning show. He basically didn’t want me to go. He said, ‘Look, I’m about to retire. Just wait six months and it’s yours.’”

Now, over 20 years later, Mansbridge is the face of The National, as much a presence at the CBC as Nash ever was. So who does he want to take over for him?

“I’m very lucky at our network, and we have a half a dozen people at least,” he says. “If something happened to me tomorrow, they could easily step into that role. I have my favourites, but I won’t be the one who gets to pick.”

Whoever the CBC chooses will have a big desk to fill and not just when it comes to reporting.

Some months ago, Mansbridge sat down with a famously smart man, President Barack Obama, then only a few weeks into his presidency. The interview was a major coup for CBC and a moment Mansbridge recalls vividly.

“I can remember the way he walked into the room where we were doing the interview. He was still on the high and the excitement of becoming the alleged most powerful person in the world,” says Mansbridge. “But he knew then that it wasn’t always going to be like that.”

Obama’s approval numbers tumbled steadily through the summer as he got caught up in a health care debate that appeared to re-energize what had been a divided American right wing. “I don’t think people should underestimate him, just like they shouldn’t overestimate him. It’s going to be an interesting four years,” says Mansbridge.

As for our own national politics, Mansbridge says that, as a journalist, his fingers are crossed that we’ll see an election soon, even though that sentiment may contrast sharply with the popular mood of the electorate.

“These are exciting nights, especially for television, they really are. But I travel the country a lot, and I see how little people are interested in an election right now. Whether they support this government or not, they just feel there are more important things for politicians on Parliament Hill to be doing right now than running around on another campaign. But that mood can change in a heartbeat.”

Whatever the case, Canadians can be sure Mansbridge will be on the case. While he and his wife, actress Cynthia Dale, spend most of their time in idyllic Stratford, the two also enjoy time in their charming Midtown piedà- terre, putting Mansbridge minutes from the CBC headquarters.

Which means that Canadians — and their pets — can rest assured that while sets and theme music may change Mansbridge will be around for a good while to come.