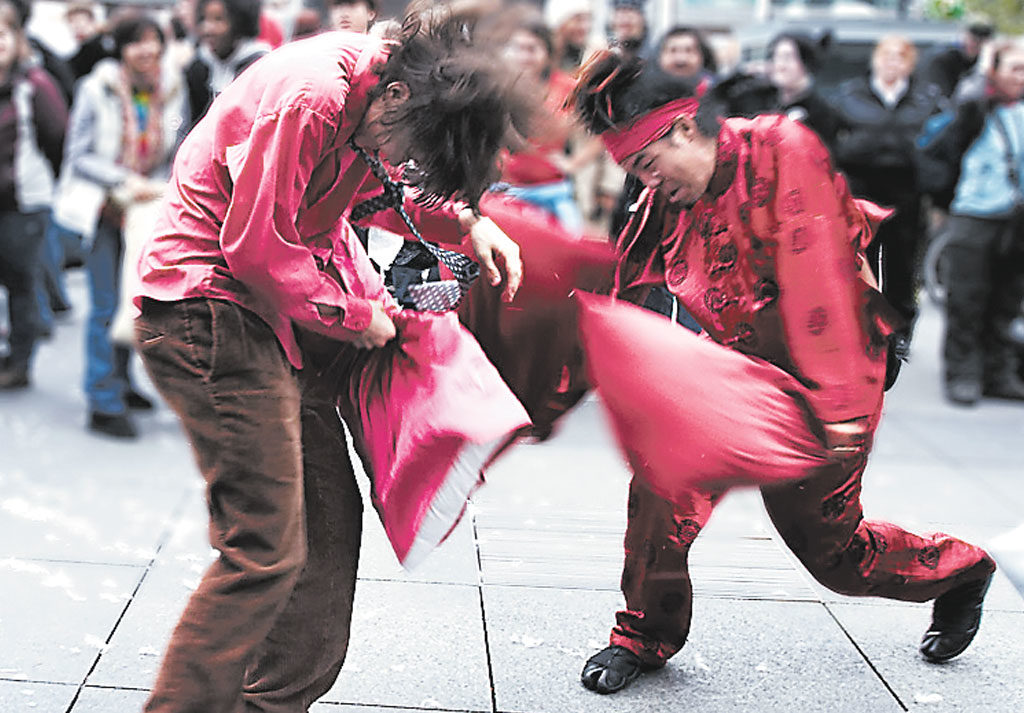 On a crisp spring afternoon, you gaze up at Toronto city hall. You take it all in — the blue sky, the sounds, even the smells of our frantic, ever-moving city. Whack. You’re struck — hard — but not hurt. Chaos erupts as thousands of Torontonians pummel each other. There’s screaming, but they’re screams of joy and delight.You’re at a giant pillow fight.

These pillow fights are organized by Newmindspace, an organization founded in 2005 by U of T students Kevin Bracken and Lori Kufner. Their first event was an Easter egg hunt out in the streets of Toronto.

“We’ve always considered ourselves to be a more playful element of the public space movement,” says Bracken. “A lot of people lend themselves to the movement by attending public consultations on things like parks and billboards, but we think of ourselves as that playful, joyful element.”

Newmindspace has organized various one-time events in Toronto and elsewhere, such as giant fights with cardboard tubes and massive games of capture the flag throughout the Financial District. But their signature event, International Pillow Fight Day, takes place on April 4.

Pillow Fight Day kicks off at 3 p.m. in Nathan Phillips Square. This year marks the event’s 10-year anniversary, and Bracken anticipates that it will be the biggest yet. More than 15,000 attendees have issued their RSVP on Facebook, and Bracken says even more are likely to show up.

“The first 15 minutes are incredibly intense,” says Bracken. “When people gain their second wind around the 30-minute mark, that’s when it’s most magical for me.”

Though Bracken and Kufner are the masterminds behind the pillow fights, they encourage others to start their own public space revolution.

“We’ve heard now of hundreds of different events around the world that emulate what we do,” says Bracken. “Toronto’s a bit of a chilly city, and there’s always a desire to embrace our public space, but not a lot of ideas of what to do with it.”