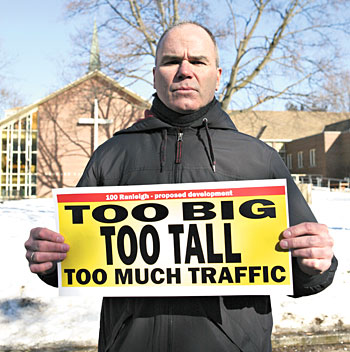 A development proposal meant to help a Mount Pleasant Road and Lawrence Avenue church resolve money problems is causing a rift in the neighbourhood. Nearly 150 people attended a community consultation last month at Sunny View Public School with most expressing strong support or concern for a plan to transform Bedford Park United Church into a five-storey mixed-use seniors’ home and community hub.

“We realized there was an irreversible decline in numbers and that we had to make some kind of change,” said Rick Coombs, representing Bedford Park United Church — the developer. Coombs said the decline in membership has made it more difficult to pay the maintenance costs for the church. If the site is expanded to include a 57-unit seniors’ home, the residence would bring in just enough money for the church to continue operating. The building would house a new place of worship, in addition to other services.

At the meeting, many agreed with the proposal and said there is demand for a seniors’ home in the area. Those protesting the development said they feared the building would be too high, too dense and its presence could mean traffic and safety problems. Cim Nunn and other local residents are concerned enough to have formed a local residents’ group in the hopes of providing a stronger voice on the issue. He said they are not opposed to the idea of a seniors’ home, but to the size of the proposed building.

“Imposing a really large institutional building in the middle of a residential street, it’s just inappropriate,” said Nunn. With Bedford Park Junior Public School across the street from the church, Nunn also said increased traffic could pose a threat to schoolchildren. According to Coun. Jaye Robinson, local residents will have plenty of opportunity to voice concerns and give input. She said it is important to remember that the proposal is in the very early stages of the evaluation process. Next, city planning will create a report on the potential impact of the building.