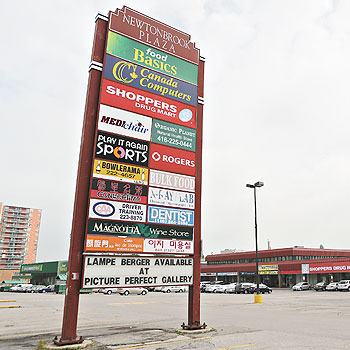 A major redevelopment plan for the Newtonbrook Plaza lands at Yonge Street and Cummer Avenue is headed to the Ontario Municipal Board (OMB) in a year, and in the meantime, Toronto City Council and local residents are still hopeful alterations can be made to make it more appealing to the neighbourhood.

As it stands, the redevelopment proposal by Silvercore Properties is for a mixed-use project focused around 5799 to 5915 Yonge St. with 1,674 residential units and at-grade retail and office space spread through four separate towers of 28, 36, 36 and 44 storeys. The development also takes in 45 and 53 Cummer Ave., with parkland proposed for 46 and 47 Averhill Cres., and in all, covers approximately nine acres of land.

Due to concerns about the proposal’s density and height, council and staff failed to make a decision in the specified time frame allowed, and Silvercore has decided to appeal to the OMB for a decision. That hearing is set for mid-September 2015.

Councillor David Shiner said there is little that can be done at this point by council and concerned residents but wait and hope there will be a change of plans.

“The project needs to be made much more realistic,” Shiner said. “The proposed density is all based on a subway station that is not there, that has no approved plans to be there any time in the near future. I think we’re miles apart in finding a common ground on this.”

Silverview Community Association secretary Anne Brooke has been representing the organization at meetings on the issue and said her membership, too, has great concerns about the density and scope of the project.

Representatives from the developer did not return requests for comment by press time.