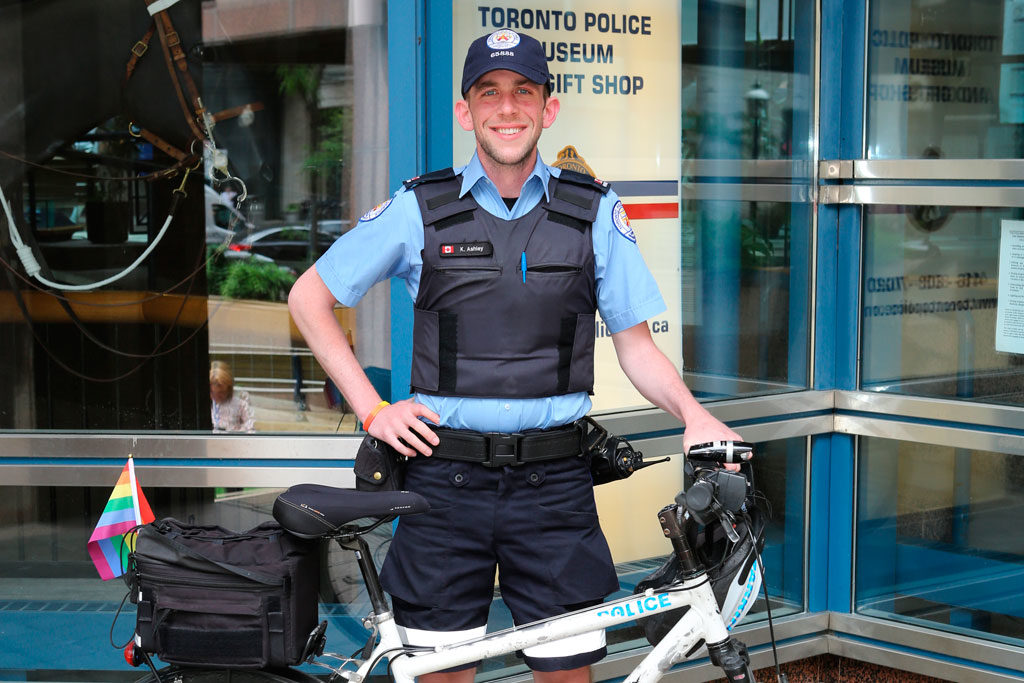 What’s your mandate with regard to social media?
I listen to what is happening on Twitter and other social media and see what people are talking about with bike lanes and give that voice some agency. I didn’t want all this attention, but it does allow me to give this community a voice that lacked agency before. The only difference between me and any other cyclist on the road — or as I call them now that I’ve been educated properly, vulnerable road user — is that I wear a uniform. Bike lane encroachment and bike lane safety is one of the biggest public safety issues facing us today.

You had a funny Twitter exchange with U-Haul the other day. Do companies often respond?
Companies have responded quite frequently and in a timely way, but I think they are realizing the public is now demanding expressions of change from them. The culture has got to change. The cost of doing business can’t be a matter of public safety. People before products is sort of my message. It’s not an anti-capitalist message. People need their products, but people need to be alive to use their products.

Getting a selfie with the bike lane guy seems to be  a thing these days.
I’m not really engaged in taking selfies with individual drivers who are committing offences. Now I’m bringing to light public and private corporations who seem to be the biggest offenders. A lot of cyclists stop and take pictures with me as I am ticketing major corporations. So yes, I am getting a good following on the road of people who want to take selfies with me.

What’s the most common excuse?
“I was just two minutes,” “Just picking someone up,” “Just dropping someone off” — to which I respond, “The sign says no stopping, not no stopping unless you were two minutes, grabbing a piece of pizza, money from an ATM, a coffee from Starbucks or waiting for your friend to come down.”

How safe are the city’s bike lanes?
In the last four years, I’ve been doored two or three times — that’s the biggest issue because people are not protected. Give people an inch, and they’ll take a mile.… Infrastructure needs to stop people from executing these behaviours.… The state of safety in our city comes down to better guiding and enforcement, community partnerships and infrastructure. We [Toronto Police Service] are working on the first two, and I’m hoping that Cycle Toronto and our community partners, like Joe Cressy, Kristyn Wong-Tam, Jennifer Keesmaat and John Tory, I hope they all take it to heart and see the community really wants the infrastructure to stop these behaviours.… I’d love to be worked out of a job is what I’m trying to say.

You’ve also been actively involved in shining a light on the homelessness issue.
It has been one of my passions growing up. I grew up in a very small town, and my dad would bring me to Toronto for a Leafs game. I didn’t see homeless people back in Arthur, Ontario, or Fergus, Ontario, and it always deeply affected me, and my dad would always give me some change to give to the homeless people, and it evolved into a passion I can explore through my career.

How does that work?
Normally, I just carry a few extra bottles of water or some food to pass out to those experiencing homelessness on a regular basis. Yesterday, I did a live stream from the intersection of Bay and College, where I made labels with the hashtags about what we’re doing today, and I handed the bottles out to people asking them not to drink it themselves but to have a read at the sticker and pass it to someone else who has experienced homelessness.

Do you get to know these people?
I’ve been on the job for four years now and in 51 Division for most of it, and I’ve gotten to know a lot of people who are around Sherbourne and Queen, familiar faces. So I’m often stopping in and checking to see how they are doing.

What’s the best part of your job?
Now, I feel like I’m actually making a difference.… Going to work now, I can have a positive impact on somebody’s day. People post videos, thank-you notes, compliments and messages — that’s the most rewarding thing. I got into law enforcement to help people, and now I feel like in a parking enforcement capacity that’s what I’ doing. I’m helping to keep people safe.

And what’s the worst part?
Giving the ticket. Nobody likes to give a ticket, and nobody likes to get a ticket. I’m human, too, and I understand that a $150 is quite a burden on many people, especially private citizens, not so much the corporations.… It does hurt my heart, but at the same time, I know I’m doing it for public safety.