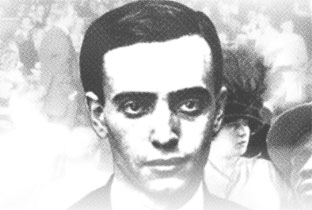 The plot of PARADE, a deadly serious but powerful musical, is true.

In 1913, Leo Frank, an innocent superintendent at a pencil factory near Atlanta, was falsely accused of murdering a 13-year-old girl who worked for just pennies a day.

Frank, a Jewish-American businessman from Brooklyn, was in a South which was more eager to lynch a stranger than a local black (even though the latter is believed by many historians to have committed the crime).

This is a musical, but it’s no musical comedy, in the FORUM or HELLO, DOLLY tradition:  it is dark and mournful.  And so very worthwhile, with a decent book by the award-winning Southern writer Alfred Uhry (DRIVING MISS DAISY) and music and lyrics by one of the more interesting American songwriters, Jason Robert Brown (THE LAST FIVE YEARS).

It is hardly perfect (even though it won a Tony Award on Broadway) but the cast here—at the Upstairs Theatre of the Berkeley—is spectacular, starring some of the best actor/singers in Canada today:  Michael Therriault (one of the two stars of the Mel Brooks musical THE PRODUCERS), George Masswohl (who played the title character in the CanStage production of SWEENEY TODD), and Daren A. Herbert (from Dancap’s solid TOXIC AVENGER of last year).

And how good to see one of my favourite actors from the Shaw Festival, Neil Barclay, who is also superb in multiple roles.  And to discover a beautiful woman with a beautiful voice, Tracy Michailidis, who plays Leo Frank’s suffering wife was a joy and an honour.

PARADE is nearly all in song, and it ranges from heart-breaking to tear-jerking to head-shaking.

My wife Merle and I were touched and wowed by this production, which blesses our city as a co-presentation of Studio 180 and Acting Up Stage Company.  Bravo to all involved—and I urge you to seek it out.

Great and memorable evenings of theatre are rare, and they usually cost up to $100 a seat, even more.   And here, in an old, run-down factory, the Berkeley, was a highlight of the year for me.