Property Brothers’ Jonathan and Drew Scott on their runaway hit show and why Forest Hill is their home away from home | TRNTO.com
Skip to content 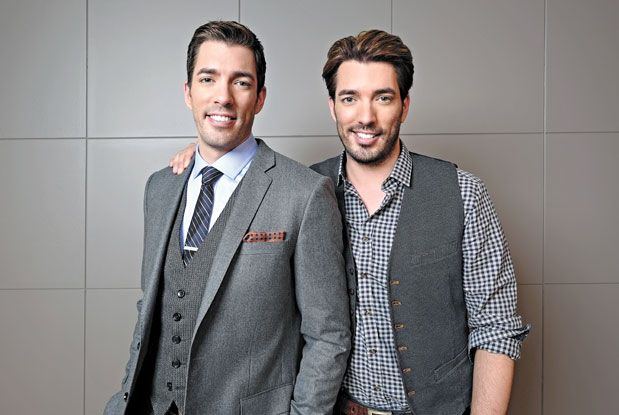 What about the home renovation show Property Brothers has made it so insanely popular across international borders?

Maybe it’s that Aussies, Kiwis, Americans, Mexicans, Canadians, Spaniards and Brazilians are all equally interested in watching a fixer-upper’s value balloon with a bit of love from a few behind-the-scenes construction teams. Or perhaps, it’s simply that witty, alarmingly attractive twin brothers Jonathan and Drew Scott have global appeal. Men want to be them, while women (and some men) want to be with them.

While watching the W Network show, it’s easy to tell the Scott twins apart thanks to Jonathan’s longer locks. (Drew is always quick to poke fun at his brother’s “effeminate hair.” Ironically, it’s luscious-locked Jonathan that’s usually picking up a sledgehammer, not Drew.)

Walk away from the screen and you’ll quickly realize that not only are the two visual doubles of each other, but their voices are interchangeable. Producers must’ve noticed this little quirk, since they hired a single Spanish-speaking voice actor to dub the duo. In many interviews, Jonathan will jokingly offer to affect a British grandmother’s accent to throw audibly confused interviewers a bone.

When I dial into a conference call with the Scott siblings, however, it’s easy to tell the pair apart. “I was in Whistler filming something. Then I was in Seattle for a meeting, so I flew in [to Atlanta, Ga.,] at 6:30 this morning, and I’m running on empty,” explains a notably less-chipper-than-usual Jonathan. On this particular day, Drew’s managing to keep his pep-level at television par.

“Jonathan is getting all dirty with demo, and I’m running around with kids,” says Drew, who is in transit to a script-writing meeting for the pair’s side project Toddler vs. Toddler (a digital spin-off spoof of their show Brother vs. Brother, which pits two teams of mentored toddlers against each other).

“Finally,” says Jonathan. “Drew can work with talent of equal mentality.” The double-your-pleasure duo that made Property Brothers such a sensation is more than a pair of hazel-eyed hunks.

They are multi-talented, many-hobbied workaholics. Between filming four television shows (their newest show, airing later this year, will feature them renovating their own Las Vegas home), recording a radio program, writing their first-ever book, launching an indoor-outdoor furniture line, developing a home remodelling smartphone app and helming their production company, Scott Brothers Entertainment, the two are kept busy, to say the least.

On top of their work commitments, the Vancouver-bred twins make time for creative projects.

They have two fiction films they’re currently developing, Wingman and High September. The romantic comedy Wingman tells the story of professional hook up facilitator, Dax, who helps unlucky guys get, well, lucky. High September has been in the works since before Jonathan and Drew were born. Their dad dreamt up the story in the ’60s, and it wasn’t until five years ago that he, at his sons’ behest, actually penned the 120-page script about a wrongfully accused cowboy condemned to a 30-year prison sentence, then released to a society and a family who want nothing to do with him.

Although their dad is a film industry vet, it was actually the twins’ high school pal Tyler Labine who whetted the twins’ acting interests. (Dad actually advised against going into the industry!) Labine was basically on every popular kids’ show back then — Are You Afraid of the Dark?, Breaker High and Sabrina the Teenage Witch, to name a few.

As teens, the pair starred in an Air Miles commercial and even scored bit parts alongside Labine on Breaker High. Other acting credits include appearances on the televised Superman origin story Smallville (Drew) and The X-Files (Jonathan).

Although the two loved acting, they recognized that they’d have to have contingency plans so that they wouldn’t, as Drew puts it, “end up as starving artists.” Their plan paid off twofold. First off, they were successful in real estate from the get-go (they even made $50,000 flipping their very first house at the age of 18!). Little did the two know that it would be their playful fraternal banter combined with their real estate acumen that would get them a full-time TV gig.

Much native-produced content screams, “I am Canadian,” but not the Property Brothers. Torontonians may be quick to take note of an Annex red-brick, although the show never mentions where filming takes place (in fact, the whole first season was shot in Toronto).

The last time the busy twosome filmed a stretch of Toronto-based episodes for their show, they hunkered down in Forest Hill for seven months.

Now, they’re coming back to Hogtown for another five-month stretch. Although they have yet to find their temporary home here, the duo are once again planning to set up their pied-à-terres in Forest Hill. Unfortunately, they won’t make the move permanent. “Las Vegas has a few things that Toronto doesn’t, like much warmer weather in the winter,” says Jonathan.

“I like living in an established neighbourhood,” says Drew, who will be looking for a temporary pad to share with his GTA-raised girlfriend. “My living requirements,” pipes in Jonathan, “are that I need to be within three blocks of a sushi restaurant.” Last time he called Toronto home, he ate at Edo Sushi “like every day.”

If you hope to catch a glimpse of the Scott brothers while they’re in town, our advice is to develop an unhealthy addiction to sushi or to join a local sports league. The twins are treadmill averse, but pro-fitness, so you’re likely to find the Scotts shooting hoops with a local basketball league.

But they’ll mostly be spending their downtime hanging with their A-list friends, like Caitlin Cronenberg, who will be doing a few photo shoots of the brothers while they’re in town.