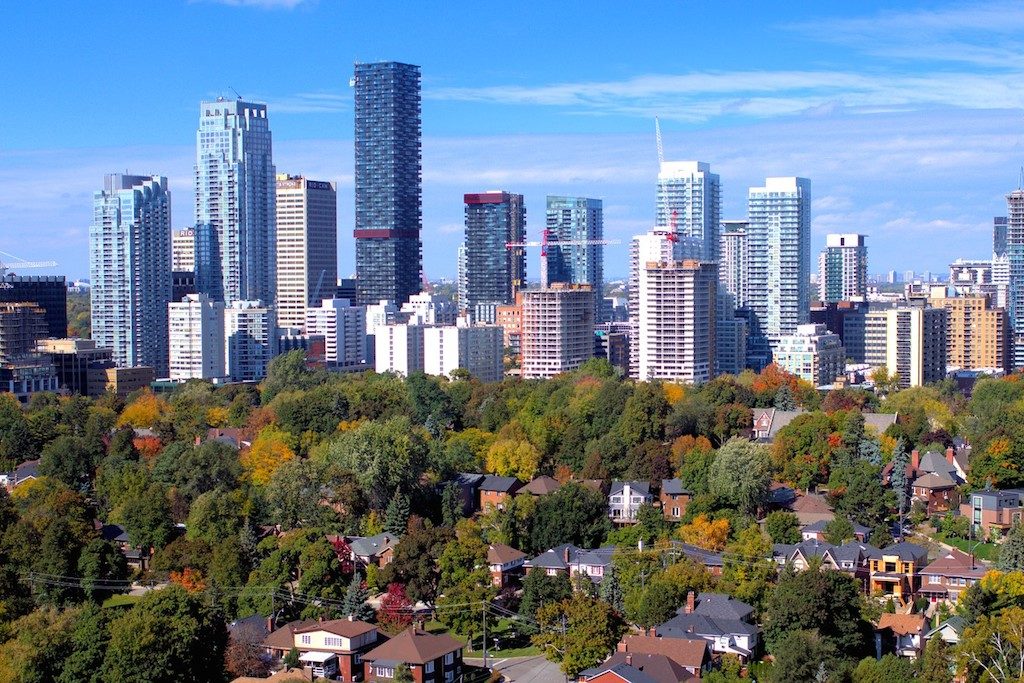 An unassuming redevelopment proposal for the corner of Bayview and Eglinton in Leaside on the site of the Sunnybrook Plaza was the kicking off point for the Ontario government’s rewriting of Toronto planning that could kickstart another tall tower building boom.

This much we know: Since taking office in 2018, the Ontario government has ditched rent control on newly constructed rental units and is bringing back the Ontario Municipal Board rules. The latest move sees MPP Steve Clark, the minister of municipal affairs and housing, reportedly significantly altering the city’s development plans in the downtown area as well as the Midtown in Focus plan that was five years in the making and approved by Toronto’s city council in 2018.

The Midtown in Focus plan called for medium density development along main corridors, including the corner of Bayview and Eglinton, which sits on the path of the coming Eglinton Crosstown LRT.

According to a local news report, at a scrum outside Queens Park on June 5, MPP Clark highlighted the need to leverage the transit investment his government is making by intensifying along the transit lines and providing more housing opportunities for people. Meaning instead of an eight-storey mixed-use development at a transit node, expect to see towers in the 25 – or 30-storey range.

Currently, the Midtown in Focus study area has been deemed park deficient by the city, the Yonge subway line is way over capacity, and each and every condo development sign that goes up comes with another sign from the Toronto District School Board that warns potential purchasers that even if you buy a unit in the building, there might not be room in the local school for your kids. There are even questions over there being enough water in the pipes.

Five years ago, local councillor Josh Matlow initiated the Midtown in Focus plan in an attempt to preserve the quality of life in the Yonge and Eglinton area and allow for infrastructure to catch up from the building boom. There were studies, extensive consultations and millions of dollars spent preparing the plan.

“This was a problem that should have been addressed 30 years ago,” said Matlow. “It wasn’t, but our generation worked on it and accomplished it and our plan was approved by city council.

“Now, the Minister is putting the development industry’s profit margin before the quality of life of the very people he purports to serve.”

According to councillor Jaye Robinson, the population of the Yonge and Eglinton area is set to double once the current approved developments are constructed. Double. And she doesn’t think to ditch Midtown in Focus is the way to deal with the issue.

“I’m very disappointed by recent reports that the Province intends to substantially amend Midtown in Focus (OPA 405) — the Yonge-Eglinton Secondary Plan,” Robinson wrote, in a prepared statement. “Hundreds of Midtown residents participated in the creation of this plan and it’s devastating to see public consultation completely disregarded at this stage.”

Robinson said that with the abandonment of Midtown in Focus and the coming approval of Bill 108 that rewrites Toronto planning rules, “it’s going to be the Wild West for developers in Midtown.”

Although there has already been staunch criticism of the move and of Bill 108, Matlow doesn’t think this will be another situation akin to the recent cuts to public health that the Ford government backtracked on when faced with overwhelming opposition.

“This is different. In that context, there was no well-financed anti-health lobby on the other side of the debate,” he said. “In this case, the deep-pocketed development industry contributed a lot of money to the Progressive Conservatives, and it is obvious to anyone watching whose interest this government is serving.”

Some Midtown and “city core” Toronto councillors have announced a press conference at 4 p.m. today to comment on the situation.

“Our neighbourhoods already cannot handle the hundreds of condos built and under construction, and now this Ministerial Order forcing 20 – 30 storey condos upon neighbourhoods is another attack on the viability of our neighbourhoods and City,” said Coun. Michael Layton, in a statement issued before the press conference.

Unlike issues over public health, Clark has already met with Mayor John Tory and Coun. Ana Bailao to discuss elements of Bill 108. Although the discussion, as Matlow explained, was limited.

“Mayor Tory and councillor Bailao met to discuss a fraction of the many concerns council raised including the return of the OMB,” he said. “If the system goes back to being weighted in the development industry’s favour then the game is rigged.”

No formal changes have been announced by the province yet. Once that happens, Mayor Tory will comment and there will be an official response from the city. The next meeting of Toronto city council is set for June 18.