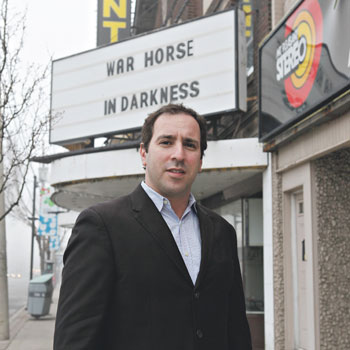 Locals are looking for ways to protect Mount Pleasant’s historic movie theatres, the Mount Pleasant and the Regent, from being dramatically altered. Although the theatres continue to show films and the owner has not publicly declared any plans to sell, the decline of independent cinema, coupled with the thought that he might eventually sell, has been enough for the area councillor to take action.

The city has already recognized the Regent’s significance with a heritage designation, but this does not afford full protection from redevelopment. Originally known as Belsize Theatre, it was built in 1927 by renowned Toronto architect Murray Brown. The Regent is zoned for up to 16 metres, while the Mount Pleasant has a split zoning for up to nine and 16 metres.

Coun. Josh Matlow doesn’t want to wait and have to react to a development application. “I would strongly like to see a buyer purchase it [the Regent] who would like to retain it and enhance it as an iconic uptown theatre rather than redevelop it into something that will destroy our community’s heritage,” he said.

Matlow has spoken with local residents who have expressed interest in buying the Regent. He sees potential for the theatres to be part of the street’s brand and to boost business, a view shared by Julie Federman of the Mount Pleasant Village Business Improvement Area.

John Robb, a commercial sales representative at Bosley Real Estate, said he has called the owner in the past to see if he would sell, but has never received a return call. He said a developer would likely be looking to get a condo of six or seven storeys.

Without the specifications in front of him, Robb estimated that each theatre is worth in the range of $2.5 to $3.5 million.

“The local councillor — if he’s so darn concerned — why doesn’t he buy it and hold it himself?” Robb said. “We pay lots of property tax in this city; it drives me crazy that people actually think they can tell people what they can do with their land.”