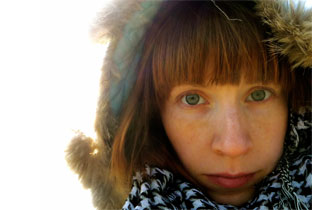 Forest City Lovers are good. More than just a buzz band, the Toronto group, fronted by the wondrous Kat Burns, continues to defy convention and produce arresting and melodic pop gems that reflect a unique sensibility. The band is scheduled for a number of concerts this week for North by Northeast, and we caught up with Burns for a chat.

You’re at North by Northeast this week doing some outdoor shows. Are they all outside?
We’re actually playing four shows! Three barbecue/daytime shows and then our Music Gallery official showcase. A couple of them are outdoors, yes!

Your music works well outside, why do you think that is?
Well, it probably stems from the fact that I’m a huge nature nerd and I love nothing more than pondering life under the shade of a tree, usually while examining a feather I found or something.

You’ve been compared to artists such as Cat Power. How would you describe yourself and who were your influences when you started out?
I actually started out really not knowing any female artists or musical peers and really not knowing what I was doing. I just knew that I wanted to make music and sing. It took a friend (Isla Craig, a talented girl!) to give me a list of people I needed to hear if I was going to be singing. The list included PJ Harvey, Patti Smith, Cat Power, Tori Amos and a bunch more amazing voices.

Where did the name Forest City Lovers come from?
It’s a Dances with Wolves reference.

How does your music reflect the contrast between your upbringing in suburban Ontario and the move to the big city?
I grew up in the suburbs, and there wasn’t much going on so we just found our own fun (innocent as kids, trouble as teenagers) in the woods and parks nearby. We also traveled a lot with my family and were immersed in biology and ornithology (my first career choice as a nine-year-old) and that’s stuck with both my sister and I. Moving to the city makes you realize that it’s big and grey and there are a million people doing the same thing as you. You just have to find your own little green spaces, metaphorically and physically, and reflect. I think that probably comes across the most in my songwriting.

The band has gotten more popular and more attention with each recording. Where do you go from here?
Ideally the next record will take us to each corner of the earth. But realistically, that is a tricky question. I am not sure what the next recording will be or when it will be out. I just hope that we can continue to create and have fun in the process.

Do you feel more pressure now that people are paying more attention and anticipating each release?
My dad always watches the interviews and reads our press (he is a big supporter) so I tend to get a little bit of an idea from him, but I try not to read too much stuff. It’s not good for you! I try to stay pressure free, because after all, you just have to keep on doing what you’re doing. I have too much in my mind to add that pressure, I would most likely explode into a million pieces.

Speaking of releases, you are sequestered away on Toronto Island. Are you writing some new songs and will any of these debut at this week’s shows?
I was here all winter writing new KASHKA songs, actually, and a few FCL songs also came to fruition. I am here again for the summer and although I’m focusing more on a collaborative installation project with my cousin, I will be singing and writing in my spare time. Claire and I might play a new one on Saturday (at the park show) and I will most likely play a couple new ones on the Sunday show, but we haven’t had too much time all together to arrange new ones in time for the big show on Thursday. We’ll be doing a cover though, of a talented songwriter. Keep the inspiration flowing, you know?