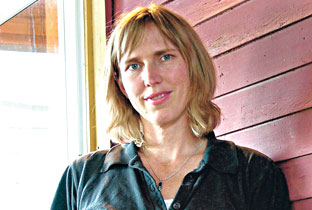 Miriam Toews drew upon her Mennonite roots in writing her debut novel, A Complicated Kindness, and why mess with a good thing? The effort garnered her a Governor General’s Award and was a finalist for the Giller Prize. Toews tapped into Mennonite culture once again in her new novel, Irma Voth, which she’ll be reading from at Harbourfront Centre tomorrow.

We caught up with her to discuss her new book, what it’s like winning a Governor General’s Award and why readings should always be kept under 10 minutes.

How does an author actually prepare for a reading?
Well at the beginning, when the book first comes out, it’s a little tougher then after you’ve been doing it for months and you’ve been on the road so you sort of know the passages that work. But I guess I just pick a section that I thought was okay to read aloud — something that was kind of self-contained. With a beginning, middle, and end, but within the novel. It’s a little bit harder when it’s a novel as opposed to a short story.

Readings seem to be rather subdued events. Any evidence of the contrary?
They can be deadly boring, especially when people read longer than they should. I say: keep it to 10 minutes! Panels are kind of interesting. It’s nice to hear writers talking about their process; sometimes it’s more interesting than an actual reading because you can read the book yourself.

Have you ever bumped into any of your literary heroes at these events?
I once met Alice Munro. I was so moved by that — and I couldn’t believe that we were at the same event. She was gracious; I said some inane things.

Alice Munro is one of your favourite authors?
Yeah, definitely one of my favourite Canadian authors.

What prompted you to write about these memories?
I think it was just the intensity of the experience, and observing the different conflicts — and also the cooperation — between the Mennonites and the filmmakers [in Mexico]. The old order Mennonites were very conservative, a lot of them were suspicious, and some of them were very hostile to the fact that the filmmakers were there. Others were welcoming and cooperative and were in the movie and welcomed us into their houses. So it was very interesting to see the interactions.

Tell us a little more about that film. How’d you get involved in it in the first place?
The director of Luz Silenciosa, Carlos Reygadas, was in Germany, and somebody gave him a copy of one of my books [A Complicated Kindness]. So, yeah, a German Mennonite that I know gives Carlos a copy of my book, and said, "Oh, well, if you are interested in Mennonites maybe you want to read this," and it just sort of went from there.

And you were nominated for an Ariel Award for your performance?
I was nominated, but I did not win.

Had you dabbled in film before?
No, never, I’m sure I never will again. [Laughs.] It’s not like anybody’s asking me!

What was that like for you to switch careers for a few months of your life?
It was great, because I didn’t have to think. It was his [Reygadas’] story, it was his script, and all I had to do was follow orders, just take direction, which I don’t do usually, so it was a nice break.

What has winning a Governor General’s Award done for your career?
Well, I guess it provided a certain amount of freedom; I was able to focus solely on my writing. It would be disingenuous for me to say that I didn’t enjoy [the success]: it was great, but you have to take it with a grain of salt.