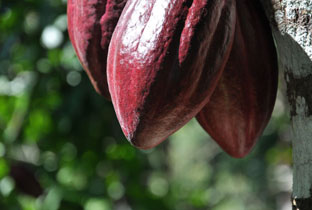 Rohan Fernando’s visually stunning The Chocolate Farmer makes social issues seem big-screen friendly. That may not be what you’d expect from an NFB production, but this film about cultural transition doesn’t cater to expectations. The Chocolate Farmer documents the life of Eladio Pop, a penniless Mayan farmer from Belize, as he adheres to traditional farming methods in the face of looming industrialism. Fernando spoke with us at the Hot Docs headquarters.

The Chocolate Farmer touches on many interwoven issues: globalization, tradition versus modernity, indigenous self-determination, women’s rights, agriculture and the environment. What was your starting point for this film?
The inspiration for the story was Eladio. I was interested in doing a film about the relationship between the first world and the third world and was originally researching international aid. I was working with [NFB producer] Annette Clarke and we thought it would be interesting, rather than doing a didactic film, to find a positive example and try to profile it. She was reading a book about the chocolate industry, a dark look at the industry [Bitter Chocolate by CBC’s Carol Off].

What, for you, would be the ideal audience response to this film? Do you want to incite people to action?
It’s not necessarily an activist film that inspires people to take down corporations, but [it aims at] an increased awareness of where your food comes from, the people who are involved in making it and what their lives are like, and awareness in terms of the choices you make as a consumer, and awareness for other cultures and what they’re going through. It’s also about the way this community [in Belize] is transforming, and the way the environment is related to cultural transformation.

There is an astonishing familiarity about Eladio’s relationships with his children, and his feelings about the changing world. Did you set out to make an “everyman” story?
I didn’t want to exoticize him. I related to him right away. You know, when you’re making a film that’s kind of intuitive, you don’t have a big plan for what the story and the message is. And there was so much in what he was saying and going through that I related to — these are universal themes. It’s about a human being; it’s not about an indigenous man or a Mayan man or even a farmer. It’s about the human condition at this time in history.

Someone in the film makes the distinction: “We’re cash-poor but we’re not impoverished people.”
I think we take our values, what we think is ideal and what we think is progress and we impose it on a culture that doesn’t subscribe to the same value system. What they value is community and connection, space and time. I hope one thing the film does is reflect back on the viewer what we take for granted as things to strive for. Those things may not eventually give us happiness.

It’s almost like their life wasn’t so bad, in many respects.
Yeah, I was envious for their life; and yet I was sad knowing where it was going to go, that they might not be able to stop where it was going. But they’re aware of what is happening. We did also make a children’s film, Elisha and the Cacao Trees, which follows the life of one of Eladio’s daughters through her perspective.

What can you say about the value of the NFB to your career and to Canada?
This is the fourth film I’ve done with NFB. I really can’t say enough about them. I don’t know where else I would have had the opportunity to make the films I’ve made. The NFB doesn’t push you in a commercial direction; it’s about really delving into the story, trying to find the truth of the situation and making it entertaining … so that people who are underrepresented can see themselves. It’s important – because it did it for me [as a Sri Lankan immigrant] – in terms of developing self-respect and being happy with who you are and feeling that you have something to contribute.

The Chocolate Farmer, Hot Docs, May 5