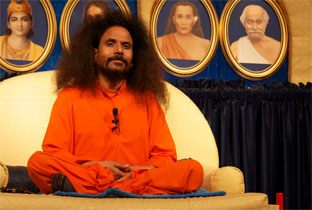 Toronto is about to get a taste of enlightenment this Friday with The Body, Soul and Spirit Expo at Exhibition Place. Among the list of special guests is Swami Shree Yogi Satyam, an advocate of spirituality and a practice called Kriyayoga. What is Kriyayoga? It’s generally passed down from Guru to disciple, so anyone who’s curious may want to hit up the Expo. We asked the Swami about meditation, living spiritually in a smart phone-obsessed world and what he thinks of yoga’s popularity in North America.

Yoga is very popular as a form of exercise in North America. What do you make of the type of yoga being taught at most North American yoga studios?
Yoga taught in North America is like a kindergarten education in spirituality. It is practiced as physical exercise in the form of bodily postures and breathing. In fact, yoga is the state of realization of truth that there is no distance and space in between any two creations of the cosmos. Any distance and space that we perceive is called ‘limited perception’ of existence of various creations, which is known as illusion or Maya.

The yoga state is the realization of the ultimate truth behind all names and forms that each and every creation is an immortal, omnipresent and omniscient consciousness. Practicing scientific lessons in spirituality – Kriyayoga meditation – makes a person experience the state of yoga. Thus, yoga is not exercise as practiced by the general public of North America. Yoga is a state that has to be attained by learning and practicing a spiritual science.

Many people today are distracted by technologies like smart phones, laptops and televisions. What kind of effect is technology having on spirituality today?
If anyone practices Kriyayoga meditation, they use modern technology, cell phones and computers in the best way and achieve a high grade of success in all walks of life. They never get distracted because they know how to use it for the welfare of self and all creations of the cosmos.

How should those who are very busy – with families, careers and other obligations – incorporate spirituality into their lives?
If any person is really busy with their family, careers and other things, then they can practice Kriyayoga in the best way. For example, Mahatma Gandhi, who was always a very busy person, practiced Kriyayoga successfully with open eyes in the walking, working, sleeping and dreaming states.

You left medical school to fully devote yourself to the practice of yoga. Why did you feel yoga was a better path for yourself than medicine?
I had the consciousness of spirituality and medical science from childhood and I treated patients also with the help of natural diet, water, natural clay and sunlight. Because of this, surrounding people called me a medical doctor from childhood, though I did not have any formal medical degree. However, I was able to heal persons of acute and chronic diseases. I wanted to study formal medical education and, therefore, I graduated in biological sciences. I then entered into medical school and very soon I realized in meditation that I could get many medical doctors in my life to support me in my spiritual work, knowing very clearly that spiritual healing will be the leading healing process for humanity. Therefore, I left medical school and opened a non-profit, non-sectarian, spiritual organization, Kriyayoga Satsang Samiti (Kriyayoga Fellowship) and Yog Satsang Samiti (Yog Fellowship), to help all people who are ready to realize the state of yoga – oneness with truth and non-violence – which removes all kinds of illness and sickness of body and mind permanently.