Q&A: Tommy Wiseau, coming to The Royal this month | TRNTO.com
Skip to content 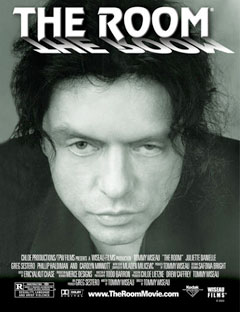 For several years now, The Room has been playing to packed movie houses around the world. The Royal has been screening it regularly since 2009. A Rocky Horror Picture Show for the hipster generation, it’s about as popular as a cult movie can be without becoming mainstream. But The Room’s legions of fans aren’t flocking to see it out of admiration. By nearly all accounts, this is a film that’s confoundingly, awesomely, hilariously bad.

Director Tommy Wiseau has been keeping himself busy since the film was first released, starring in the Internet short The House That Drips Blood on Alex, among other projects. Still, his magnum opus remains The Room, once dubbed “the Citizen Kane of bad movies.” Wiseau has been decidedly vague about whether the film is intentionally bad – he’s billed it as a “black comedy” – or whether it’s just bad. Next week, he’ll be appearing at The Royal for a series of post-screening Q&As. We got in touch with him to talk about acting, fame and The Room’s legacy.

What do you make of the type of fame you’ve attracted to yourself? Is it something you were seeking?
You know, I’m just a simple guy. So whatever you refer to as “fame” I just accept. I believe in hard work and people have to decide if they want to see The Room or not. Apparently, I have fans, and I love them and they love me, I guess [laughs]. So I’m happy with that one.

When you first started getting into filmmaking and acting, did you intend to get into comedy, or did you just kind of fall into it?
I always wanted to be a rock star, but I discovered acting through a great teacher. Her name is Jean Shelton. She opened it up for me. I attended many workshops, but she opened up what acting actually is. That’s why I always stress to people that even the big stars, who make 20-30 million per picture, people don’t realize that some of those people do not offer what I think actors should offer. It’s a grey area, but you have to define what is good acting.

What does good acting mean for you?
Well for me, it’s a chemistry, you see, the words are secondary. When I attended my acting workshops, people were clapping before I even started a scene. So always from the beginning of my acting career, I’ve had something – I don’t know if it’s my voice, my poise, the accent – I’m very sincere about it, you know? But mainstream media, they are missing the point, especially in America. I did stuff not for myself, it was for the public, you see. To learn. Can you play football from three feet away? People say, “oh, he’s crazy.” Well I have a surprise for you: go to any park in America, you can see it. I picked up people playing football three feet away from being at the park. I studied it. Some people actually play football three feet away in the studio, but do they get criticized? No. They pick on me. What people don’t understand is that when someone has created something that’s different, it’s extremely difficult to be accepted. The Room is a totally different cookie-cutter from Hollywood.

When you see people watching The Room, and you see their reactions, what goes through your mind?
I love it. People can act however they want. I’m pro-freedom. If people express themselves, that’s fine. What’s wrong with that? You can laugh, you can cry, you can express yourself, but please don’t hurt each other.

You can throw a spoon at the screen.
If that’s what you want to do, then do it [laughs].

What do you think future generations will think about The Room?
Have you seen Cleopatra with Elizabeth Taylor? You’d think it was a totally different scenario from The Room. But you know where the connection is with the characters? Between Cleopatra and Lisa. They’re from different eras, but they have something in common. What they have in common is manipulation. They have certain influences that they can share with people, but they don’t use it wisely. If you look at Cleopatra, everything goes down the tubes the same way it does with Lisa. The way I see it, The Room sort of connects people around the entire world right now. The Room is screening around the world, in different continents, and it gets a lot of positive responses from people. I hope that The Room will be with us for a while.