Q&A: Trish Dolman, the filmmaker behind Eco-Pirate: The Story of Paul Watson | TRNTO.com
Skip to content 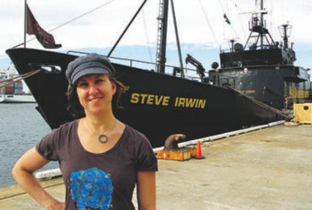 This Friday, Trish Dolman’s thrill-doc Eco Pirate: The Story of Paul Watson comes to TIFF Bell Lightbox for one week. Paul Watson, a Toronto-born animal rights activist, takes the peace out of Greenpeace (of which he was a founding member) by using aggressive tactics to save whales. Come hell or high water, he’ll be riding the righteous wave of environmentalism — not for humanity, but for all the other animals.

Dolman and her crew followed Watson into what she calls the “Wild West” of the high seas and lived to tell us the tale.

Why make this film now?
Why “now?” It took nine years to make! Over the years we’d raise some money and then shoot and edit some of it and then run out of money and had to raise some more. We were able to finish the film because we finally had the money, and also the market changed – environmental documentaries had done very well – and of course Paul has become more famous because of his series Whale Wars on Animal Planet.

What was the starting point for making Eco Pirate?
Years ago I was inspired to make a film about Paul. In 2002 I approached him, here in Vancouver. He said, “sure,” [but] with a kind of I’ll-believe-it-when-I-see-it attitude. So I had the OK to do it and then we set about trying to raise money.

Watson is forever on the high seas with harpoons pointed at him. Did you expose yourself to any danger while making this film?
I didn’t ever feel in danger. I know members of my crew did. When I was hiring people some of them said, “I’m not going aboard a ship with a guy who rams other boats. That’s crazy!” [Camera operator] Kristian Olsen went to the Antarctic and filmed that part, and I think everyone on the ship felt endangered when Paul crossed paths with that Japanese ship, and the seas were incredibly rough there and that was a challenge. But I just love the sense of adventure of being on a ship, so I never felt imperiled. I think you have to feel one of two ways.

Do you hope this film will incite people to action, or do you intend it only as a compelling biopic?
I think both. I wanted to make a film that brought together aspects of Paul’s personality and aspects of the evolution of the environmental movement. Paul has a very cultivated media personality. He knows how to make the media work for him, for his cause. And I wanted to find out about the man. Paul is a unique individual. There’s not really anyone else in the world doing what he’s doing. So I wanted to understand what made the mechanics of a man like that tick.

Watson is a controversial figure. Did your opinion of him change over the course of making the film?
Of course my opinion changed. I respect Paul. We’re friends. We get along really well. He’s a complicated guy. Like he says in the film, “People think you’re a hero and they’re disappointed when they find out you’re a human being.” Paul has flaws like all of us do.

It took me several years to figure out how I wanted to tell this story. It’s easy to try to make a hero or a villain out of Paul, and if I made a hero out of him I’d be preaching to the converted. I wanted to make something that was more than that. I’ve concluded that Paul couldn’t be any other way than the way he is.