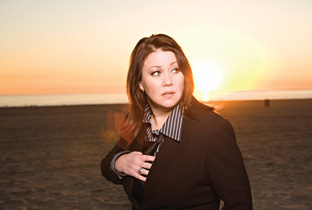 With a new live album, a new book and a weekend radio show, multiple Juno Award winner Jann Arden is having a busy year. Next month, she’ll appear on Global’s Canada Sings, a six-part series in which teams of ordinary Canadian co-workers form singing groups to compete for a $10,000 donation to their chosen charity. The judges are Pierre Bouvier of Simple Plan, Robert “Vanilla Ice” Van Winkle and, of course, Jann Arden.

We caught up with her to chat about philanthropy, work versus luck and what it’s like being a judge.

On Canada Sings [Arden playfully sings an A natural], did you want to be the mean judge with the accent?
Yeah, wouldn’t that have been easy. You know, when they made me the offer I thought, “I don’t want to do this.” But my manager said, “It’s not what you think. It’s not 100 kids that want to be flown to Vegas to be famous and get a record deal.” These are people that want to earn money for their charity. These are people that don’t typically sing and dance. These are firemen, teachers, zookeepers, truck drivers. What a cool concept! Everybody wins. Not a record contract, but a nice chunk of money for the charity of their choice. Plus, they have this experience that takes them over the course of a few weeks, working with vocal coaches and choreographers, and they get to be in the spotlight on a national TV show, singing and dancing in a production that is as good as anything I’ve seen on Broadway. And I am not kidding you; nobody sucks! Nobody!

Are you concerned one of these groups of ordinary working Canadians might do so well that they quit their day jobs and leave a hospital or something without a staff?
I would be thrilled if that happened. If someone says, “There was such a demand for it, they’re releasing a single,” cool! But I know that’s not what’s motivating them.

Apart from the charity element, what are the merits of competitions in performing arts?
Well, I think in this show, for the most part, people are competing against themselves. Does that make any sense? There were people who hadn’t sung a day in their lives. Some people hadn’t danced since junior high school. So there is competitiveness to win money for a charity. Yeah, that’ll light a fire under anybody. And the fact that it’s motivated by selflessness, you know? But once they get a taste of it – it’s funny watching as this stuff unfolds. They get a taste of what attention feels like, what accolades feel like, it’s very intoxicating. So you definitely see people developing that hunger, which is great to see! I think all these people left this show inspired, feeling “I can do anything now! Why was I so afraid of trying things my whole life?”

You have said you are always surprised by what you have accomplished.
Careers generally don’t last this long. A huge percentage of acts have a shelf life of about 36 months. After three years you’re like, “Whatever happened to those guys that did that?” So I’m grateful to be in that small percentage who survived that.

And is that luck or hard work?
It’s work. Because art’s subjective, it doesn’t mean what I do is great; nine people could hate me and one could like me. So it’s really up to the individual [artist] how far you can push things. It’s not one thing, and I always tell that to parents who tell me about their kids who are singing. Yeah, your kid can sing okay, but if you think that’s where it begins and ends you’re wrong. My life has very little to do with singing. The actual time I spend singing is minute. I enjoy it, but there are so many things I have to do.