Queen of complaints - my new BFF | TRNTO.com
Skip to content 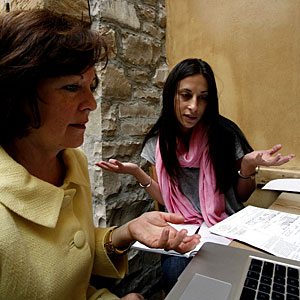 HOW MAY TIMES a day do you find yourself complaining? This pampered princess can find more than a handful of “issues” before my second cup of coffee. For many, it could be in our DNA. Thankfully, we have girlfriends. But even a good pal has limits. For those occasions there is Jane Steele Moore, professional complainer.

JANE STEELE MOORE has taken complaining to a whole new level. Seven months ago, she started Complaints Are Us, described as a “service we all need: someone who can complain about a faulty product or bad service we’ve received and take action.”

She realized there was a need for a complaints advocate after spending numerous evenings complaining with girlfriends over dinner or cocktails.

“I just thought, we can’t keep complaining! Someone has to do something,” she says. “There are concierges for everything else. Why not a complaints concierge?” I meet Steele Moore at a coffee shop at Avenue and Eglinton.

Immediately she hands me her business card, which features her name, contact information, and title: Chief Complaints Officer.

In person, Steele Moore is not someone you’d be afraid of. She’s in her 50s, petite and pretty. Her voice is calm, collected and soothing — she’d be perfect for reading a bedtime story for your children. But she possesses certain qualities that should scare any company or store dealing with her: She has patience and she won’t back down. (Once, she waited on the phone on hold with a telecommunication company for 97 minutes to complain about something.) As she says, “I’ll deal with the customer service representative from hell.”

“You know, most companies or stores, if you can get through to anyone on their 1-800 number, will say, ‘This is our policy,’ and that’s such a canned answer. People don’t want to complain for the sake of complaining,” she says.

Unlike most of us, who get aggravated and annoyed, Steele Moore says she likes complaining because of the challenge it presents. She will keep on the phone until she gets an answer and is not embarrassed to send e-mails to CEOs until she gets a response.

“So, when you call people to complain on someone’s behalf, you introduce yourself as calling from Complaints Are Us?” “I sure do,” she says.

I’ve brought a list of complaints for Steele Moore (McDonald’s screwed up my order, the construction at Avenue and St. Clair is mind-blowing, when I order movies from Rogers On Demand, sometimes they stop in the middle), but I’ve brought one major thorn in my side.

The day before I meet Steele Moore, I get a $30 parking ticket — while I was WALKING to the meter to PAY for a ticket to put on my dashboard. The parking ticket person had magically disappeared, like David Copperfield, in the 30 seconds I had turned my back. I complained about it to all my friends that day.

“I’ll get that cancelled for you,” says Steele, taking the ticket and my paid parking meter receipt. I’m doubtful and wonder if I should just pay the $30. Yet, I don’t want to spend my afternoon at City Hall, nor do I have the time.

“ People get very emotional when they complain.… I take all emotion out.”

In recent months, Steele Moore has complained on behalf of clients to phone companies, numerous car dealerships, a washing machine company and banks. (She won’t deal with issues like custody or medical problems.)

Most people, she says, don’t have the time or energy, even if they are wronged, to complain.

“For example, this washing machine that had broken for one of my clients. Well, she called numerous times, had to stay home twice, and they charged her twice for the visits, even though the machine was just purchased and under warranty,” she explains.

“Even then it wasn’t fixed. Imagine having to ruin two days of your life, spending so much time trying to get someone to fix it, and then still have it broken? When I called, I got it fixed in a couple days.”

“People get very emotional when they complain,” says Steele Moore. “They get frustrated easily and then people aren’t receptive. I take all emotion out,” she says. “I’m a third party.”

She knows she has done a good job when her clients receive calls from companies making up for their wrongs.

Steele Moore charges a basic $50 fee (the first hour) to fill out your complaint form and then by the hour afterwards, normally $25 each hour, $75 per hour for high-priority cases. For some — such as the client who had purchased a mattress from a leading company for a couple thousand dollars and then, after a couple weeks, found that he was sinking into it and couldn’t get anyone to call him back — it’s beyond worth it.

By the end of our meeting, Steele Moore has had my parking ticket cancelled, which normally would have cost $30 — same as the ticket, with no aggravation. (Yippee!)

What can I say? It’s very relaxing to have someone else to deal with your problems.

I ask her, jokingly, if she can do something about the weather. “Well, my husband is a meteorologist,” she says. Is there nothing my new best friend can’t do?