Raise a glass to two of T.O.’s top spots for boozy brunch | TRNTO.com
Skip to content 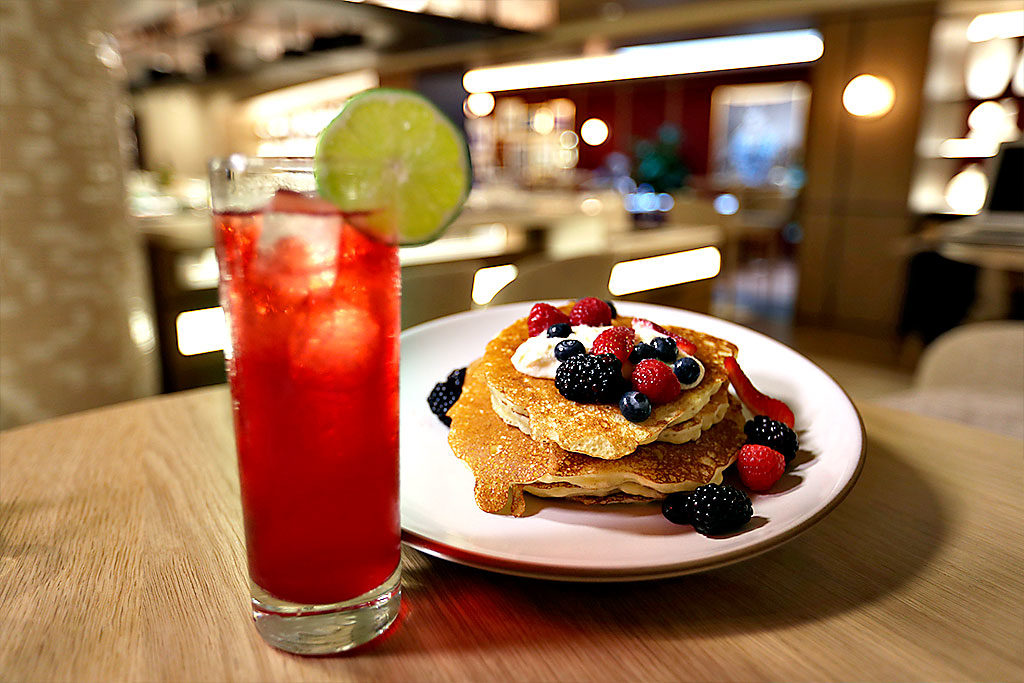 When tasked with an assignment called drunch (aka boozy brunch), it’s essential to gather some important resources: namely, people who are willing to make the sacrifice to eat pancakes and drink cocktails with you early in the morn. Fortunately such people were not too difficult to locate.

Cocktails at Constantine
This chi-chi newbie is tucked into the new boutique hotel Anndore House, found but a stone’s throw from Yorkville. She’s clearly meant for lounging, full of very comfy banquettes, with soothing lighting and a fireplace for good measure. Affable servers come dressed in all possible silhouettes of dark denim while Craig Harding’s Mediterranean menu makes ordering tough.

After arriving early to beat the brunch crowds and ordering coffees (hey, you can only sip on tipples after 11 a.m.), we go with the shakshuka and pancakes.

The shakshuka arrives tableside in an adorable cast iron pan, with a duo of eggs lazing away in a bed of tomatoey stew nicely spiced with chili and cumin. We load it onto the za’aatar-dusted flatbread and scarf it down quickly.

Finally it’s cocktail time! Bellinis and caesars are bypassed in favour of more involved tipples; the Lavandula pairs Lillet Blanc with fancy-and-local Dillon’s cherry gin and sparkling wine for a sweet yet citrusy libation that acts as the perfect alarm clock.

The buttermilk pancakes arrive and are extra luxe, topped with not-too-sweet ricotta, fresh berries and maple syrup. We manage to finish them no problem.
We spot some delicious-looking avocado toast and wonder if we should have gotten that, too? Next time.

Before we leave another cocktail is required. This time the Frais Podensac, boasting mint and grapefruit, makes us feel a bit bubbly. But it could also be the environment — and the fact that we were up with the birds?

A sweet and savoury meal at School
With its industrial environs, hip-hop tunes bouncing overhead, She-Ra playing on screens and a queue full of mini-sunglass-wearing millennials, School was deemed a top pick for drunching.

The Liberty Village spot has been drawing crowds with the promise of chicken and waffles since 2009, and we were keen to pair ours with a mimosa or two.

But after shimmying our way into a line and then being told the wait would last at least one turn of the ole clock, our midday was stalled somewhat. Balzac’s coffee was sipped, and finally, a cool 90 minutes later, our table was ready.

Settling in against a wall of clocks all indicating 3 p.m., we survey the drinks menu. With caesars on special ($2 off!), this seemed the most sensible of the beverage options. They arrive and offer plenty of kick, finished with spicy beans and a slice of sugar-cured Ontario bacon.

Food-wise, our stomachs demanded we go straight for the carbs. For savory, we went with the aforementioned waffles, which arrived topped with nicely moist pieces of buttermilk fried chicken with brown sugar butter and lotsa honey packing some heat.

For sweet? Pancakes. The weekend special involves a stack of their flapjacks (four-deep, to be specific) loaded up with apple crumble and toasted pecans, a dusting of cinnamon sugar and caramel to finish.

After doing our best to polish both dishes off, we emerge defeated and order mimosas (one blood orange, one pear basil) in an attempt to feel less full.
70 Fraser Ave., 416-588-0005