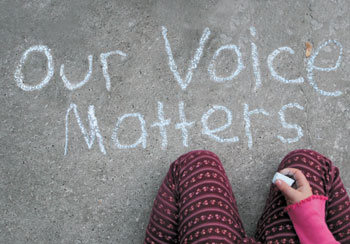 As the events of the Occupy Toronto movement dominate our media, the issue of social justice has become a ubiquitous topic of discourse. It’s a discussion that no doubt has reached even your children. Thanks to virtually instant access that kids have to information and ideas via television and the Internet, they are more exposed to a socially conscious dialogue than any generation before. And as naturally inquisitive beings, they are going to ask questions. They may even want to know how they can become involved in various political or social movements.

These are all good things, according to journalist and social activist Michele Landsberg, who recently released Writing the Revolution, a collection of her articles on second-wave feminism.

“People were shocked to hear we’d discuss politics with our children,” says Landsberg, who is married to UN Special Envoy Stephen Lewis. “But our children were very eager to participate.” With their family being so civically minded (her youngest son, journalist Avi Lewis, is now married to activist Naomi Klein), discussing politics at the dinner table might have come more naturally compared to some other families. But Landsberg reminds us that “it’s about respecting [children’s] capacities. You need to establish and instill that their opinions are valued,” regardless of how inclined they are to discuss social issues.

The degree to which your children will ask questions and voice their own interests depends on how open the communication is within the family. Simply starting a dialogue will encouraged kids to get involved. “Kids want to be part of adult lives,” Landsberg says. “They’re keen to participate because their family is.”

But what if your family isn’t that socially active? How do you supply an opportunity for your curious child to learn and become more engaged within the community around them?

Start with small actions. “It doesn’t matter what the task is,” says Landsberg. “It’s about what you really care about as a family.” Landsberg suggests asking your family what’s the most important issue that, together, you can tackle. It could be as simple as wanting to cook meals for a senior couple in your neighbourhood or as grand as volunteering to build schools overseas. What’s essential, according to Landsberg, is that parents “become authentically involved with the cause. Whether it’s a food bank or a political cause, talk about it, which engages the child.”

In many cases, children don’t need to be pushed, they’re often naturally socially and politically active, more so even than their own parents. Landsberg cites Free The Children founder, Thornhill’s Craig Kielburger, who was only 12 years old when he started his charity, which encourages youth to get involved to make a difference for their peers in the developing world.

The charity is just one example of a handful of local organizations that help young people become more engaged with the issues that are important to them. For the politically minded child, the City of Toronto offers two programs: the Toronto Youth Cabinet, where kids work with city councillors to provide a forum for young people, and InvolveYouth, which enables community-based organizations to include young people in their decision-making.

For the social butterfly, check out Youth Assisting Youth, which connects teen volunteers with young children in need of mentoring in their community.

“Kids can do so much more than we give them credit for,” Landsberg says. Parents can help provide the opportunities for them to excel.