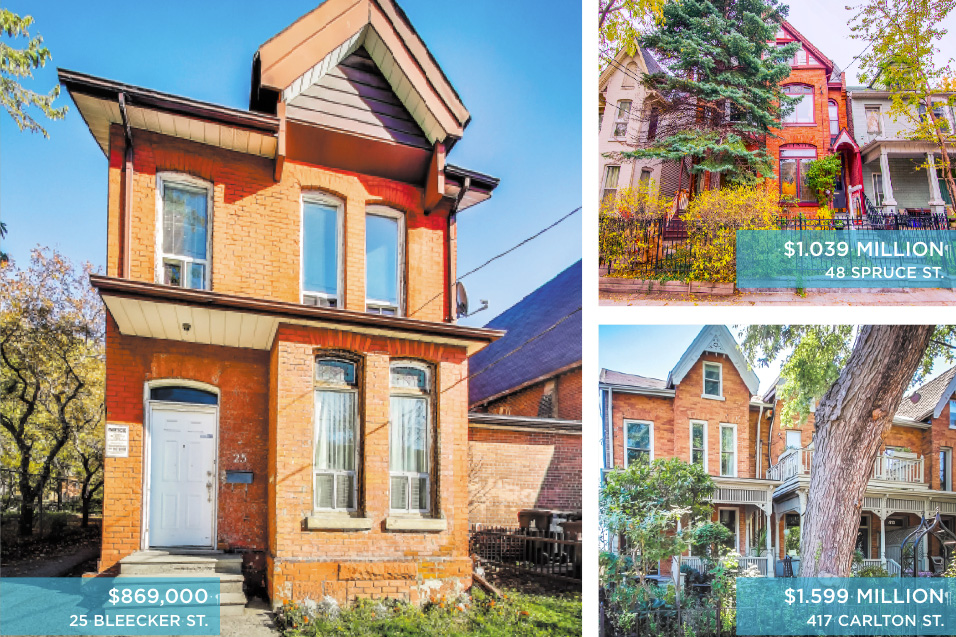 Cabbagetown dates back to the 1840s, when Irish immigrants settled here after fleeing the dreadful potato famine in their homeland. They grew cabbages in their front gardens to help put food on the table, but this practice offended the prosperous British residents, who used the term, “Cabbagetown,” then synonymous with “slum.” Many homes became sketchy rooming houses well before the Depression. However, by the late 1970s and ’80s, new homeowners began restoring the many fine Victorian houses in the area, triggering a wave of gentrification that has helped make Cabbagetown one of the most sought-after and artistic neighbourhoods today.

Vibe
Multimillion-dollar renovated Victorian homes rule the tree-lined streets. A three-storey TD bank at the hub of Parliament and Carlton also signifies the increasing prosperity flowing into this tightly knit community, which is far from perfect but sure has personality. The highly central and coveted area continues to transform rapidly.

Cost
The average price of housing in Cabbagetown — largely made up of semi-detached houses and slightly more condos than townhouses — is just under $1 million.
• Stained glass windows give the three-storey Victorian house at 48 Spruce St. a quiet elegance. The price: $1.039 million.
• At 417 Carlton St. is a restored Victorian home with new french doors. It is priced at $1.599 million.
• Listed at $869,000, the circa 1900 house at 25 Bleecker St. is on sale for the first time in more than 70 years.

Scene
Riverdale Zoo, which had an elephant giving rides to visitors during the Victorian era, is now the site of Riverdale Park — the recreational centre of Cabbagetown and home to the well-loved Riverdale Farm. The area also has a community arts centre, youth centre and public library. Oh, and Riverdale Park West is one of the best dog parks in the city.

Grub
Residents can get a taste of Taiwan’s night scene (or, “xiaochi,” for small eats) at the Kanpai Snack Bar. There’s F’Amelia for hearty Italian fare with a rustic vibe. Stout Irish Pub is a tavern with board games galore; House on Parliament the area’s most eccentric pub. Jet Fuel, an alternative to Starbucks, is popular among artsy and literary types. And Daniel et Daniel — one of the city’s premier catering kitchens — offers boxed lunch meals at its storefront here.

Walkability
Homes in the area rank in the “very high” range in walkability, thanks to the proximity of local schools, shops and restaurants as well as public transit.

Schools
While short on private schools, the neighbourhood is home to many public schools such as Winchester Public School — which has been around since 1874.

Commute
Cabbagetown is bounded by Wellesley to the north, Gerrard to the south, the Don River to the east and Sherbourne to the west. Castle Frank Station is within walking distance and Sherbourne Street has protected bike lanes.

Shops
Earlier this year, Léonie Lilla left her position as chef at Junction eatery Farmer’s Daughter to open Pipler Accessories, a retail shop specializing in ethically made  accessories. The area abounds with other mom-and-pop stores like the Epicure Shop, a Cabbagetown fixture.