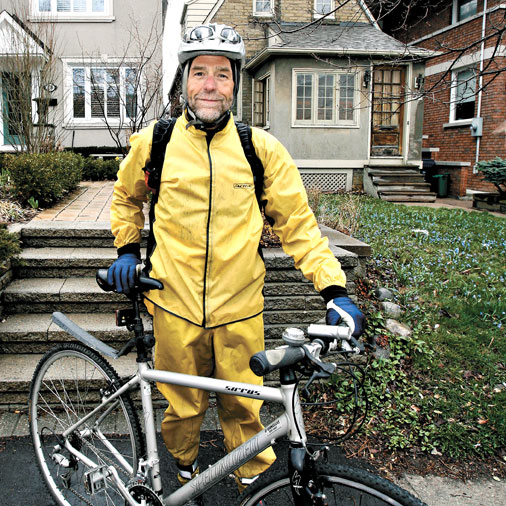 Tim Klassen has a mantra that motivates him to hop on his bike and train, even when the weather outside is, well, frightful.

“Even a bad day on the bike is better than a good day in chemo,” he says. “It is nothing in terms of what these kids are going through.”

All the training and weather- braving is in preparation for June 13, when just a few weeks shy of his 60th birthday, Klassen will be a national rider in the Sears National Kids Cancer Ride, a 12- day cycling fundraiser that raises money and awareness for childhood cancer.

The ride kicks off in Vancouver and ends in Halifax, making it the longest event of its kind with a focus on kids’ cancer.

“We’ve all been touched by cancer,” says Klassen of his motivation to participate in the ride. “I had a nephew who died of childhood cancer and a father who died of cancer.”

The local resident started training for this adventure on Nov. 1, 2008, and plans on spending 600 hours on his bike, covering 15,000 km, before it even begins. That’s not to mention the decades of preparation he has from competing in two Ironman triathlons, 17 marathons, and four Tour For Kids rides — another cycling fundraiser in support of childhood cancer.

Klassen says he joined the Sears National Kids Cancer Ride because, in contrast to some other charities, “One hundred per cent of the money raised goes straight towards the cause.”

Alongside the time each rider dedicates to training and fundraising, they also pay a $3,995 registration fee to cover the hard costs of the race, and are expected to raise at least $25,000 towards this year’s collective goal of raising $2 million.

When the campaign comes through Toronto on June 20, local residents will have the opportunity to get involved by riding along with the cyclists for anywhere between 15 and 200 kilometres, to raise community involvement and as a fundraising initiative.

Other fund-raising efforts have included riding on site at local Sears stores, where the GTA riders set up their bikes and ride on wind trainers, to raise money and to promote Sears’ involvement as the major sponsor of the race.

For Klassen, who is a manager at the Ontario College Quality Assurance Service, the most challenging part of being a national rider is the time commitment. “With the training and fund-raising it’s like having three full time jobs!”

Thankfully, he has the full support of his wife Anne Sauvé, an avid cyclist who has also participated in the Tour For Kids rides, currently acting as his campaign manager.

The ride covers a total of 6,800 km, with each rider cycling between 2,500 to 2,700 km. Having conquered training sessions during which he faced howling winds and heavy rainfall, Klassen says he feels prepared for the upcoming ride.

“It was a great challenge and a neat feeling,” he says about a particularly epic trip in April, during which he and his fellow GTA riders rode all the way to Newcastle in a storm. “Now there’s nothing this ride can throw at us that we haven’t been through.”

Post City Magazines salutes Tim Klassen for biking to make a difference in the lives of children diagnosed with cancer.