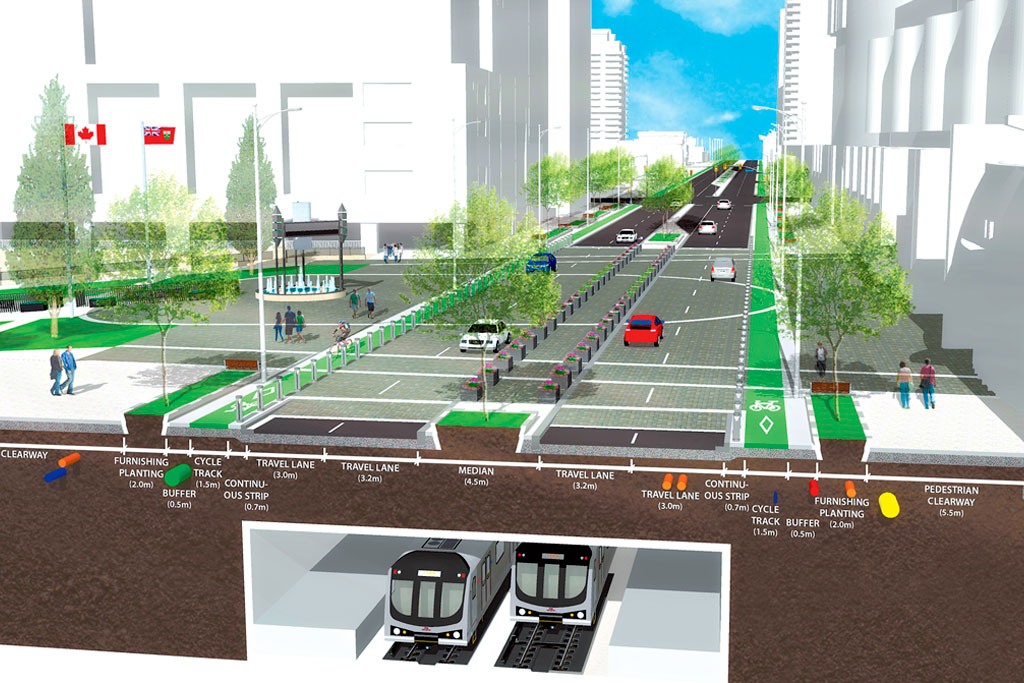 Pencil in the date: Dec. 16. At the next Toronto city council meeting expect some fireworks as REimagining Yonge, a contentious plan to carve two car lanes off of Yonge Street between Sheppard and Finch and create a pedestrian- and bike-friendly district that puts people first is back up for debate after more than two years.

The last time the city tried to revamp uptown Toronto in the area of Yonge from Sheppard to Finch, in the spring of 2018, it got messy. REimagining Yonge was eventually shelved for further study into transit implications much to the dismay of local councillor John Filion and Willowdale residents who were advocating for the creation of a pedestrian and cycle-focused district.

The debates were loud and cantankerous and involved former city councillor and mayoral candidate and current Ontario Premier Doug Ford.

At a city council meeting regarding REimagining Yonge, Ford was asked by Filion whether he had read the report, and Ford replied, “I don’t need to read a staff report to see they’re going to destroy Yonge Street.”

It was that kind of process.

Now, REimagining Yonge is back and being put forward at a very different time when the value of public space and safety of, for example, pedestrians, and cyclists, has taken on new urgency since the COVID-19 pandemic.

The overarching goals of the REimagining Yonge project remain as follows, from the staff report:

• Improve safety and reduce the number of people who are killed and seriously injured on the street in keeping with the City’s Vision Zero Road Safety Plan.

• Improve vibrancy of the streetscape in keeping with the economic importance of North York Centre.

• Address state-of-good repair along the corridor.

At a meeting on Dec. 1, Toronto’s Infrastructure and Environment Committee has endorsed the Transform Yonge design vision within the overarching REimagining Yonge project, which is the recommended design from the general manager of the city’s Transportation Services department for the reconstruction of Yonge Street in Willowdale.

The project would see a reconfiguration of Yonge Street from Florence and Avondale Avenues, located south of Sheppard Avenue, to the Finch Hydro Corridor just north of Finch Avenue.

City council will soon vote on the Reimagining Yonge project, which would put bike lanes and wider sidewalks on north Yonge Street.

Email your support for this great project to the mayor and your councillor with the following link:https://t.co/HDelCzCWEI

According to the plan, Yonge Street would be reduced from six to four lanes between Sheppard Avenue, and Bishop/Hendon Avenue, and the area would see the introduction of separated cycling lanes, a centre landscaped median and wider boulevards.

The preferred design option between Sheppard Avenue and Florence/Avondale Avenue is six lanes, with cycle tracks and a centre landscaped median.

In addition, two new signalized intersections are recommended along Yonge Street at Horsham Avenue and Ellerslie/Norton Avenue in order to improve pedestrian safety, as well as a narrowing of other side streets along Yonge to reduce crossing distances and improve the pedestrian environment.

In a letter supporting Transform Yonge posted to his website, councillor John Filion called the proposal a chance to change Yonge Street from a highway to a main street between Finch and Sheppard, saying the area will become a place to stroll, shop and linger.

“When you give motorists a highway, they treat it as such,” wrote Filion, who said that the average speed on that section of Yonge is 17 kilometres per hour faster than other four-lane main streets in Toronto.

“Why in the world would we want to live next to a highway full of speeding cars, 75 per cent of which are travelling to or from the 905? This should be our main street.”

Transform Yonge is on the Infrastructure Committee’s agenda today. If you’re looking for a recap of the plan, I wrote about what Transform is, and how it will make our community a better place to live. Read more at: https://t.co/Pub0H6uK5w pic.twitter.com/rphSfAKdpG

Nathan Gomes, vice-president of the Bayview Cummer Neighbourhood Association thinks the reduction of lanes on Yonge Street will create a traffic bottleneck in the area.

“That’s I think the main concern because they are going to try and find different ways to get to the 401.”

Expect more “war on the car” rhetoric when REimagining Yonge is up for debate on Dec. 16.